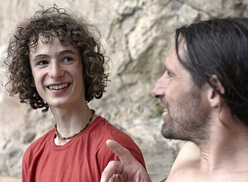 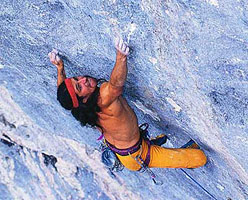 Alexander Huber in 1992 on the crux of Om 9a, Triangel, Austria.
Photo by Heinz Zak

On 14/06/2009 Adam Ondra carried out the first repeat of Om 9a, the route first ascended in 1992 by Alexander Huber at Endstal in Germany.

It was simply a question of time, but in this case it really was a long time coming. 17 years to be precise. An eternity.The chapter was finished off by him once again, by 16 year old Adam Ondra who last weekend carried out the first repeat of Om at Endstal, Germany. The plot had been written in 1992 by 24 year old Alexander Huber who with this small work of art paved the way for his personal research of the hardest difficulties. A search which, after Weiße Rose 9a in 1994 at Austria's Schleierwasserfall, culminated two years later with the nearby Open Air 9a+.

Perhaps because they weren't located in cutting-edge crags, perhaps for their inconvenient walk-in or the inclement weather, or perhaps simply because they were damn hard... the fact of the matter is the routes remained unrepeated until magic Ondra opted for an almost personal mission: to repeat the apparently unrepeatable. Which resulted in Weiße Rose in September 2008, then Open Air two months later - for the record, this is one of the hardest routes Adam has ever climbed. And now Om in the Endstal, Triangel. After this perfect trio, we thought it might be interesting to hear from the author who years ago invested much time and energy in his personal project. And as usual, the German climber who accompanied Ondra on this latest performance has very clear ideas indeed.

"We climbed together last Saturday and Sunday. What should I say: it's taken a long time! But now one can really say that climbers like Adam Ondra and Chris Sharma embody a generation of climbers who have breached a new degree of difficulty. Although Adam hasn't climbed anything harder than I did at the start and in the middle of the '90's, he is repeating these routes in sovereign style which proves that today he's climbing at a completely different level than the best were during my time. Open Air in five days, Weisse Rose in seven days, Om in two... and by the way an 8b and an 8a on-sight, and Shogun 8c third try... And he's also on-sighted a series of 8c's... Sharma was the first to reach 9b and as things look, Ondra will up the difficulties further still. Furthermore, Adam is a really pleasant person and we had two really nice days!"

Ondra confirmed to us that Om is 9a. We repeat: this was first climbed by Alexander back in 1992, to put things into perspective, Adam was born in 1993! Nevertheless we believe that something finally really is happening. So we'd like to make this brief analysis, or better still, small question which implies a big hope. Seeing that it's taken for granted that the phenomenon Ondra, capable of quickly repeating the hardest problems in the history of modern climbing, combined with Chris "King" Sharma's and his continuous effort to shift the grades up a further level still, represent the extreme of this sport climbing movement, what one needs to comprehend is -  what about all the rest? Or better, whether this "earthquake" will result in a change for all. We believe (and hope) it will.

It is important to understand that times are a changing, or rather, have changed: Ondra and Sharma (and many others) are redefining the limit of what is possible. The difficulties climbed by Sharma (his 9b) and the speed with which Ondra repeats any problems considered to be the limit are ample proof of this. It looks as if the exploration upwards is back on again. And that raising the limit at the crag or on boulders is becoming the "game" which really counts. A sort of return to the original pioneering spirit of sport climbing, some fresh air in order to dream a little further. Who will rise to the challenge? And above all who will have the courage to dedicate time to even harder and even more tiring projects? We hope many, that all, will take up the gauntlet!