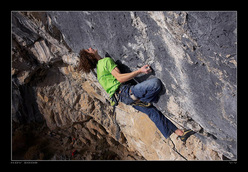 2008. Adam Ondra during the second ascent of Open Air, 9a+, Schleierwasserfall, Austria.
Photo by Vojtech Vrzba 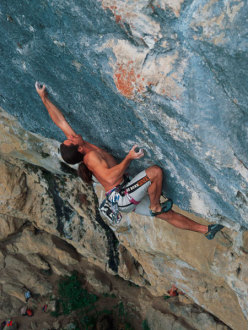 1996. Alexander Huber on the crux of "Open Air“, 9a+, Schleierwasserfall, Austria.
Photo by Heinz Zak

Interview with Adam Ondra after the long-awaited second ascent of Open Air at the Schleierwasserfall and the first onsight of Hotel Supramonte in Sardinia.

It's the word on the street. Adam Ondra has carried out the long-awaited second ascent of Open Air, Alexander Huber's testpiece at the Schleierwasserfall in Austria. The 15 year old from the Czech Republic needed a total of 9 attempts spread out over 5 days to get to grips with Huber's 1996 masterpiece which he feels as being his most challenging redpoint to date. He then celebrated the day in style, on-sighting both Überflieger 8a+ and Long Island Icetea 8b. We set out to find out more with this mini-interview about Open Air and his recent first on-sight of Hotel Supramonte in Sardinia.


Congratulations Adam for Open Air, yet another fantastic, and fast, ascent.
For Open Air I needed 5 days, or just 9 goes in total. I had checked the route once in July and I had absolutely no idea how to climb it, then again immediately after my ascent of Weisse Rose. This extended weekend I spent a further 3 days on the route. Alexander gave me the general beta and that helped a lot.

The route was originally climbed in 1996, yet the first repeat came over a decade later.
The main reason reason why it remained unrepeated for so long is the fact that it has very hard boulder problem, especially to figure out. The first 25 meters are an 8a+, then there's a good rest on the ledge. I spent 30 minutes there! From the ledge you follow a huge but quite juggy roof which ends in good holds on the lip of the roof - up there it is about 8b, maybe 8b+. From there you have to make 12 extremely hard moves, about 8A+ bloc. The crux is pulling your right foot very high and from there with the help of another intermediate hold you reach for a two finger pocket, which you can miss very easily. It is very very strange, just standing on one good foothold and holding almost nothing. After this you climb another 5 meters to the anchor, during which you just enjoy your successful ascent.

How does it compare to the other Huber routes you've climbed at the Schleierwasserfall?
Personally I found Weisse Rose more fantastic. Open Air has a very particular boulder problem, but the line is impressive nevertheless. Alex must have been super strong when he sent it in 1996 and what I admire most is his unbelievable endurance and stubbornness in trying it at the time. You have to climb 40 meters and then you fall and fall again. An incredible mind!

What about your incredible ascent?
During my successful ascent I got really pumped and I was at my absolute maximum for a while. Compared to other climbs I feel that this is my hardest route yet! I did it first go that day, so I then climbed Überflieger 8a+ and Long Island Icetea 8b, both of them on-sight. It was a perfect ending to a fairy-tale day :-)

Talking about fairy-tale days. In Sardinia you carried out the first on-sight of Hotel Supramonte, something which many climbers had dreamt about.
Hotel Supramonte onsight had been my goal for a year, but when I checked it out last autumn it was wet so I didn't even try it. The route is completely amazing of course - the place, the rock and the line... it's just perfect. This year I wanted nothing less than the on-sight.

So you put yourself under pressure...
Yes, I was a little bit nervous because a foot slip could have ruined my dream. I was quite tense on the first two pitches, then I settled down and after sending the 5th pitch I just enjoyed myself all the way up to the top.

The route eases off considerably towards the end, but you climbed all its pitches.
Of course I led the last easy pitch as well, it wouldn't have been complete otherwise. I'm not only searching for climbing difficulties: if you want to "beat" a line, then why start rappelling 50 meters from the top of the wall?

What will you remember about this route?
That pure joy of climbing, together with Pietro dal Prà. This was certainly the best experience on Hotel Supramonte.

29.10.2008
Adam Ondra, Hotel Supramonte, Sardinia and the climbing game
Adam Ondra and his holidays in Sardinia, where he managed the first ever on-sight of "Hotel Supramonte" before making the first ascent of "Campo con corvi" 9a at Bronx.