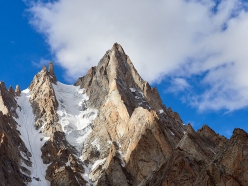 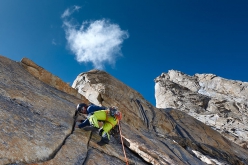 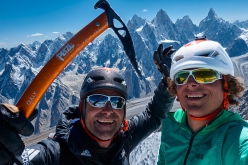 Alexander Huber and Fabian Buhl on the summit of Choktoi Ri, also known as Summa Brakk, in Pakistan after having made the first ascent of The Big Easy
Photo by Fabian Buhl 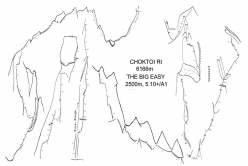 The video of the ascent of the stunning ridge up Choktoi Ri 6166m in Pakistan’s Karakorum, first climbed in summer 2018 by Fabian Buhl and Alexander Huber. The 2200m route is called The Big Easy.

In summer 2018 Fabian Buhl and Alexander Huber travelled to the Choktoi valley in the Karakorum to climb Choktoi Ri, the 6166m peak also referred to as Summa Brakk, via an extraordinary and still unclimbed ridge that Huber had spotted years ago during one of his many trips to Pakistan.

After the approach and some days spent at Advanced Base Camp at 5000m to acclimatise, the two set off up the first part of the ridge and fixed ropes before returning to base camp. A few days later they managed establish Camp 1 at 5500m and climbed slightly higher still, before retiring due to poor conditions. When a new weather window arrived they spent two days pushing upwards all the way to the summit, past iced up corners and a steep headwall, before descending down the line of ascent.

The new route is called The Big Easy, is 2200m long and has been graded 510+ A1. While for Huber this marks yet another success in the Greater Ranges, for Buhl it represents and important baptism of fire to high altitude mountaineering. The 28-year-old had begun his climbing career concentrating on some of the most difficult boulder problems in the world, but in 2013 he turned his attention to trad climbing and multi-pitch climbing. After having pulled off the first winter ascent of Alexander Huber's Wetterbock in Austria,the two joined forces in 2016 to make the first free ascent of Sueños de Invierno at Naranjo de Bulnes in Spain.