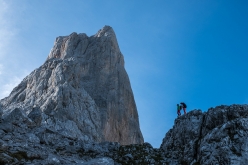 Alexander Huber and Fabian Buhl below Picu Urriellu, Spain, where on 23/09/2016 they made the first free ascent of 'Sueños de Invierno' (540m, 8a)
Photo by Heinz Zak 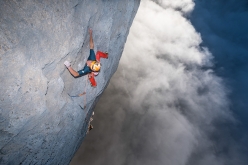 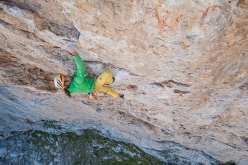 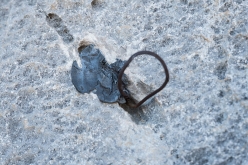 Plomo, the Spanish version of the copperhead, placed by José Luis García Gallego and Miguel Ángel Díez Vives in 1983 on their climb 'Sueños de Invierno' up Picu Urriellu
Photo by Heinz Zak

After having been shunned for years, it seems as if the enormous Naranjo de Bulnes monolith is now finally enjoying the international popularity its splendid limestone walls deserve. Every summer Picu Urriellu - better known to climbers as Naranjo de Bulnes - attracts more and more climbers worldwide, and this September even the ace Germans Alexander Huber and Fabian Buhl paid the mountain a visit and made the first free ascent of Sueños de Invierno, one of the peak’s historic routes that breaches its overhanging NW face.

Sueños de Invierno was established in 1983 by José Luis García Gallego and Miguel Ángel Díez Vives who forged their 540m high "direttissima" through the massive bulge called "Desplome de la Bermeja" (meaning light red), past difficulties up to 6a and A4+. At the time this was the hardest aid climb in Spain but, perhaps more importantly, the two had spent 69 consecutive days on the wall - an absolute record - from 1st March to 8th May.

That winter in 1983 proved extremely harsh with high winds, temperatures down to -30°C and just 20 days of good weather. After their successful ascent the King of Spain, Don Juan Carlos, sent a telegram congratulating the entire team that also included Francisco Javier Rodríguez Gordillo, Jose Antonio Navarro, Ángel Ortiz and Pablo Fernández. The first winter repeat was carried out 18 years later by the Russians Viktor Bolodin, Alexander Klenow, Anatoliv Moshnikov, Nikolai Totmyamin and Tengiz Verulashvill, in February 2001. Because of all this an aura of mystery surrounded the route, strengthened in the years that followed by few repeats and talk of unreliable, distant in-situ gear.

Sueños de Invierno - winter sleep - became a legendary line and fell into a sort of hibernation until late this summer, when Germany’s Alexander Huber and Fabian Buhl travelled to Spain’s most iconic mountain. The duo worked the route for five days and then, in 9 hours on 23 September, they made the first free ascent. The free version is graded 8a but, as the climbers confirm, the route is demanding not because of it’s technical difficulties but because of the minimal, run-out gear.

RELATED NEWS
15/06/2009 - Picos de Europa rock climbing in Spain
The mysterious place that everyone seems to have heard about, but where not many have dared venture! Under-rated and often overlooked, the Picos de Europa is Northern Spain's hidden secret! Consisting of a huge area of wild limestone peaks, it offers rock climbers and mountaineers a wealth of routes in a range of styles, sizes and difficulties.