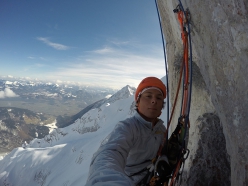 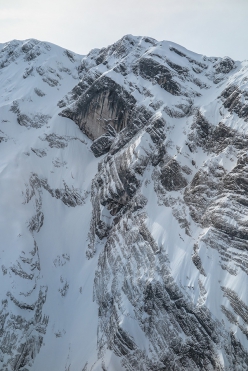 The steep approach to the Wetterbockwand, Göll NE Face, Berchtesgaden Alps, Austria where Fabian Buhl made the winter ascent of Wetterbock (8c, 10 pitches) from 17-19 March 2016
Photo by Fabian Buhl 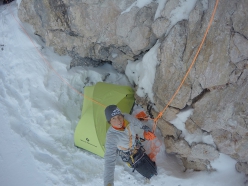 From 17 - 19 March 2016 German climber Fabian Buhl made a solo ascent of Wetterbock, a 10-pitch 8c freed in 2014 by Alexander Huber up the Wetterbockwand, Göll East Face, Berchtesgaden Alps, Austria.

Just before the end of the calendar winter Germany's Fabian Buhl pushed himself into uncharted waters by making the first winter ascent, solo, of Wetterbockwand, a 10-pitch climb established alone by Alexander Huber in 2013 and then freed by the German alpinist in autumn 2014 with difficulties up to 8c.

Buhl is best known for his hard bouldering up to FB8C, but after breaking both his ankles when bouldering he has evolved into a highly talented all-rounder, with repeats of the trad climb Prinzip Hoffnung and the multi-pitches Silbergeier 8b+, Nirwana 8c+ and Feuertaufe 8b+ to his name. This is the first time though he has ventured up into the mountains in winter. "I’d never done any alpine, mixed and generally snowy routes before" the 25-year-old told planetmountain.com "but I prepared carefully for this climb. I was interested in finding out how a route like this feels in winter, on my own."

Huber and Lukas Binder helped with the logistical support of transporting gear up the initial part of the approach, and Buhl then continued up the final, avalanche-prone slope alone to repeat the route from 17 - 19 March. He fixed ropes and returned to bivy at the base of the face at the end of each day. Although he didn’t climb the route free in a single push, he climbed all sections free individually. "Alexander was skeptical that it could be climbed in winter, since the protection is fairly runout even in summer and many of the cracks that accept pro are iced up, and this motivated me, too. I have to admit the only reason I kept going sometimes was because I knew that, somehow, Alex had already climbed it."

On the 21st of March winter is traditionally over, from the 17 -19 March I got lucky and the long-awaited weather window appeared. I dedicated a lot of time and sacrificed bouldering strength to prepare for my winter project, something I have never done before. It was a new challenge, which felt pretty impossible in the beginning.

When Alexander Huber told me about his new line at the Wetterbockwand I was blown away, as it offers steep, bullet limestone, is very runout and in a pretty remote area. Months later, I started thinking about a possible solo winter ascent. I knew it was going to be very tough. Alex was skeptical about my idea, but offered his support right from the beginning. Along with him and Lukas I explored the approach and stashed some gear close to the wall. Not only is the climbing difficult, but the steep, snowy approach is at risk of avalanches and takes about 4 hours. Most of this is possible on skis, but the last 350 vertical meters up through the couloir are way to steep; it's an interesting mix of climbing and hip-deep digging through the snow. But a full-on winter experience was exactly what I wanted. I was willing to go all in to realise my dream.

On this kind of limestone, placements for skyhooks or other pro in order to rest or aid past a difficult section are rare. The only option remaining therefore is free climbing. As usual Alex's bolts were far apart, but after the first bigger falls I started to trust my self-belay system again and did not care anymore. The only thing I worried about was the next belay, while my air mile collection grew steadily. Sometimes I spent 40 minutes on a particular runout section, climbing back and forth, not knowing the way and searching for the path of least resistance, removing the ice from the holds or cleaning snow off the ledges. In the end, luck was definitely on my side and I managed to pull off the first repeat of the Wetterbockwand route on the North Face of Hoher Göll.

Waking up in the cold each day at 4:30 am and climbing until dark was a new experience and it felt good to see how my body works in such a situation. I was 100% focused at all times and felt confident, I did not question any decision I made and never felt tired. Only after reaching the safe trail to the car did my adrenaline run out and I was overcome by a crazy fatigue.

Never would I have thought that I’d need to dig so deep, to reach the top of this incredible route in winter! Now I am unbelievably happy it’s over and I made it back safely!"