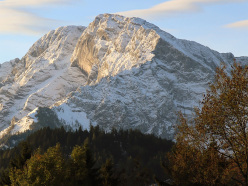 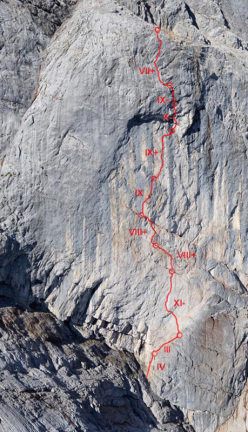 The report by German alpinist Alexander Huber who, on 18 September 2014 together Michi Althammer made the first free ascent of Wetterbock (8c, 10 pitches) up the Wetterbockwand, Göll East Face, Berchtesgaden Alps, Austria.

I see the Wetterbockwand every morning from my balcony, while I sip my first cup of coffee, so you could call it my breakfast wall. It looks steep, the rock on Mount Göll is superb quality and the face I'm attracted to is located in a particular, exposed position, high up on Göll's 1000m high East Face. I've often looked at it and wondered what it would be like to climb it? Last autumn the time finally came to check it out for myself!

A long approach, first a wild traverses from Ahornkaser to Wilder Freithof followed by a 600 m scramble up Grade I and II terrain, past the compact limestone slabs, leads to the base of the route. Göll's East Face isn't too steep and that what makes it a classic ski descent in the Berchtesgadener Alps. In short, a good three hours are needed to reach the start of the climb.

Over three days in September 2013 I managed to make the first ascent, alone, and I would have continued and completed my efforts with the redpoint ascent. But the crux pitch was anything but easy, and the early snow in mid-September dashed my hopes. I got back on the route only last summer, and given our August this was no mean task. The incessant rain didn't make things easier, but luckily the pitches up to the large roof remained dry. I had to remain on the ball if I wanted to send it and in the end this payed off: On 18 September, after much rain and waiting around, Michi Althammer and I pulled off the redpoint ascent. As it happened, Franz Hinterbrandner was there to document the entire ascent! On days like those things simply couldn't be better. It was steep, it was beautiful... and sadly it's all over!

From a purely technical perspective the Wetterbockwand isn't as difficult as the 8c+ crux pitch on Nirwana but overall, with its 3-hour approach through the Göll East Face, it's by no means less demanding. And certainly one of the more demanding in alpine environment.