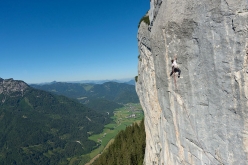 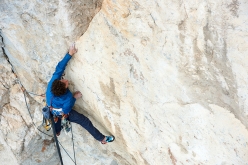 In summer 2016 German rock climber made the first free ascent of Ganesha, a seven-pitch 8c he had established alone up the Sonnwendwand at Loferer Alm in Austria. Buhl climbed rope solo.

Ganesha - the God of New Beginnings - is the name of the new route freed last summer by German climber Fabian Buhl on Sonnwendwand above the Loferer Alm in Austria. This sunny limestone face offers 50 or so routes but is best known for the difficult climbs established by Alexander Huber such as Stoamanndl, Donnervogel and, above all, Nirwana. This 8c+ was established ground-up and rope-solo by Huber in 2012 and had to wait until 2014 for its first repeat, at the hands of 24-year-old Buhl.

At the time of his repeat Buhl was evidently struck not only the route’s beauty and difficulty, but also by the unusual style of its first ascent, and in autumn 2015 he returned to the same portion of the face to add his own line up through the compact limestone. Setting off immediately next to Nirwana, Buhl climbed ground-up and alone to forge a seven-pitch outing protected by trad gear and a minimal amount of bolts; while the belays are bolted, only the two crux pitches contain two bolts each. In summer 2016 Buhl worked the route for ten days before freeing it, with difficulties up to 8c, on his own.

The Buhl - Huber ties are interesting and worth exploring. In summer 2016 for instance the two Germans traveled to the Naranjo de Bulnes / Picu Urriellu in Spain where they made the first free ascent of Sueños de Invierno (540m, 8a), while in March 2016 Buhl had made the first winter ascent, solo, of Huber’s 8c Wetterbock on Wetterbockwand in the Berchtesgaden Alps. It’s worth noting that Huber was probably the first to establish an 8c ground-up and solo: Bellavista on Cima Ovest di Lavaredo in the Dolomites, climbed in four days in winter 1999 and freed in summer 2001.