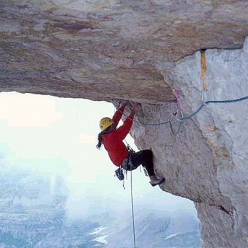 "Bellavista" on the Tre Cime di Lavaredo was created over a four-day period of solitary climbing in winter 1999 by Alexander Huber. On 18 July 2001 the German successfully redpointed the route, descibing it as "by far the wildest route on an alpine face."

bellavista may have all the numbers to be just that. It follows a line between Via degli Scoiattoli and Via del grande tetto on the Cima Ovest di Lavaredo, overhangs 60m, weighs in at a mighty 8c and is, as he states, protected only by pegs (apart from the belays. Editors note).

Published below is a brief acount of the ascent.


"Alexander had been intent on freeing this immense overhanging roof ever since its first ascent. He opted for the hardest of styles: without bolts, sport climbing up to 8c on the fragile dolomite northface.

He worked the route over a period of 5 weeks and, as expected, protecting the route with normal pegs proved to be difficult. Now he's finally got time to party!"

It is more than just our impression: the 'Bellavista' that Alexander enjoyed... will no doubt be talked about in the future.