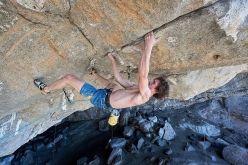 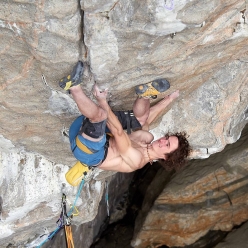 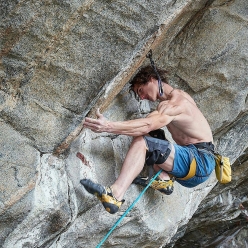 Interview with Czech climber Adam Ondra who at Flatanger in Norway is currently attempting a route he believes might merit a 9c grade, meaning it would be the hardest sport climb in the world.

After having established all three of the world’s 9b+, Change at Flatanger in Norway in 2012, La Dura Dura at Oliana in Spain in 2013 and Vasil Vasil at Sloup in the Czech Republic later that same year, 24-year old Adam Ondra is back in projecting mode. Once agin the Czech climber has identified a line at the huge Flatanger cave and after having put in considerable effort, he reckons it may be even harder than his previous three creations. Possibly even, for the first time ever, 9c.

Adam, straight out: what’s the story behind this route?
Well it’s a route that’s been there for quite a few years. I think I bolted it about 2012 or 2013 and even back then I could sort of imagine doing the individual moves, but I could see that linking the whole sequence, with its 8C boulder, all the way from the ground just looked way too ridiculous! That’s why I abanadoned the project for a while. Last year I retried it, found some slightly better beta and now, slowly but surely after a considerable amount of work, things are beginning to look slightly more positive and doable.

How do you go about working this?
Last year I’d just jug up to the boulder and try it on its own, and I spent 4 weeks trying it. On my trip this May I finally managed to link the problem.

After this presumably the route continues...
Yes. First there’s a knee-bar, which I always considered really bad, but with a lot of practice and knee-bar training I managed to turn it into a really good knee-bar, which means I can stay there for about a minute with no hands - the upside down one that Pavel posted on Instagram (linked below). That hopefully gives me enough power for crux #2, which is a really burly 4-move 8B boulder problem I’d say, past an undercling and a high step up.

And then?
Then there’s another little rest, before finishing up a 7C boulder problem

7C right at the end?
Yes, and I’m really hoping I won’t fall off that sequence on the redpoint! It’s actually not very secure climbing, past underclings and slippery feet where it’s hard to control the tension if you’re a little tired. It’s going to be exciting.

You mentioned slippery feet. This is your absolute maximum. So how important are conditions for a route like this one? Do you get ideal conditions for example only one day per year, and you need to get things 100% right when that moment comes?
Oh for sure, this route is so much at my limit I need conditions to be absoltely perfect. If they’re not perfect I can nevertheless try the route, get a bit more stamina, but I’m pretty sure for the actual send conditions need to be absolutely perfect.

So how has progress been going?
As I said, on my last trip in May I managed to link crux #1, the 8C crux, for the first time. So my goal then became to start below this crux and link all the way to the top. I reckon just linking 8C into 8B into 7C is a 9b+ sport climb, I’m pretty sure about that. And I got very very close! I guess if I have enough stamina, i.e. if I can rest enough on all the knee-bars below crux 1 I shouldn’t lose the tension I need to deal with that first crux and I reckon therefore that the route is doable.

It’s hard work, but presumably also great fun?
Yes, for sure! So far it’s been a crazy process. I’ve never given a project so much thought and effort, I’ve discovered that the moves are so specific, requiring such a special approach. Compared to last year, thanks to my specific training I now feel much better on all the individual moves

Does it suit your style?
Perfectly! There are some really high steps which I like, and I’m pretty sure there is no other way of doing some of those moves.

What struck us though is that it seems to climb through a crack. It’s almost as if the hardest sport climb is actually a crack climb...
Yes well some of the holds are in cracks, but it definitely isn’t somewhere where you can hand jam. I’ve worked really hard on my finger locking skills, all the cracks are really flared and what you need above all is immense core power. Are you wondering if someone who’s a crack climbing master can do it easily? That’s very unlikely.

When will you return?
In July. All of June I’ve been training really hard at home, specifically for these sequences, we’ll see.

Last question Adam: you’ve stuck you're neck out by stating that it’s a possible 9c. At present there are only 3 9b+ in the world, all of which you first ascended, only one of which has been repeated and confirmed by Chris Sharma. Is it not perhaps a bit early to be talking about a grade this difficult? Or - what leads you to believe it could be 9c?
All the effort I’ve put in so far has been to do the individual cruxes, and then link it from below crux one to the top. And this section on its own is at least as hard as all the 9b+ I’ve climbed in the past. I’m pretty sure that the link from the ground could make it considerably harder. How much harder? I’m not sure, I’m going to have to find out.