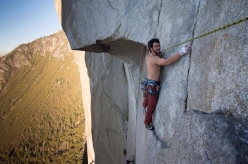 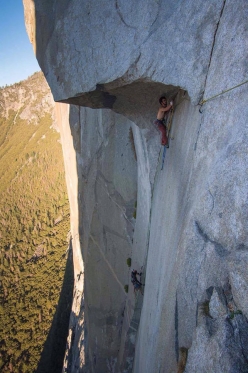 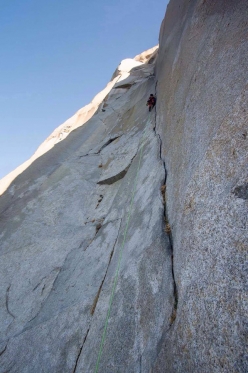 Interview with American climber Jim Reynolds who on 21 October 2017 teamed up with Brad Gobright to speed climb The Nose on El Capitan in Yosemite in 2:19:44. In doing so they beat the previous speed record set in 2012 by Alex Honnold and Hans Florine by almost four minutes.

There’s new speed record up The Nose on El Capitan. Early on 21 October the American climbers Brad Gobright and Jim Reynolds raced up most famous big wall climb in the world in a mere 2 hours, 19 minutes and 44 seconds. In doing so the duo bettered by almost four minutes the previous speed record, described by some as “unbeatable” and set in 2012 by none other than Alex Honnold and Hans Florine.

Ever since the first ascent was carried out over 47 days between 1957 and 1958 by Warren Harding, Wayne Merry and George Whitmore, speed climbing on The Nose has a long and rich history. Royal Robbins, Joe Fitschen, Chuck Pratt and Tom Frost made the second ascent in 1960 in 7 days, while fifteen years later Jim Bridwell, John Long, Billy Westbay clocked in a time of 17:45 and became the first to climb the route in a single day. As times started to drop rapidly in the 1990’s, the level of risk started to rise exponentially.

Tactics are “everything goes”, including free climbing, pulling on gear wherever necessary, simul-climbing and extremely long run-outs which could result in huge falls, as happened unfortunately on 11 October to Quinn Brett. The late Dean Potter, who held the speed record on various occasions at the start of the new millennium, noted that “speed climbing is one of the most dangerous things you can do as a climber”. But evidently it is also extremely fascinating, as we found out when speaking to Reynolds, a member of the Yosemite Search and Rescue team.

Jim, how did you get into speed climbing the Nose?


I first climbed the Nose 6 years ago with my good friend Dave Gealy. Quickly thereafter we felt the pull to go faster and do more, first with an In-a-day ascent and later linking Half Dome and El Cap in the same day. It wasn't until last year that Brad and I climbed the Nose together. We whittled our time down and went into winter agreeing to try for real in the spring, but then Brad broke his ankle so we weren't able to try until fall.

How did you train?
During the summer I mountain biked for cardio and practiced with my wooden katana for mental acuity and body awareness.

Wooden Katana?
Also known as bokken. It’s a wooden sword styled after the sword of the Japanese samurai, which was used in practice for swordsmanship. I like to describe my use of it as Conscious Movement.

And then you trained on the route
Yes, when fall hit it was just lap after lap on The Nose. On our 11th attempt this fall we broke the record by 4 minutes and our previous best time by 10 minutes.

How much gear did you carry?
We took 8 cams, 11 quick draws, and 14 spare carabiners. For the first 14 pitches, Brad only places 4 cams, and clips fixed gear and anchors otherwise. I climb the upper 60% of the route getting one gear resupply. Basically we are stretching the rack super far, relying on our free climbing ability to get us up, which is all a little easier each time we choose to bring 1 less piece.

So tell us about your safety margin
The run-outs are huge, but we determined we have enough gear that we can slow down and climb relatively safe if we feel uncomfortable. It means that we have to be really honest and understanding of our bodies capabilities. Knowing when to push it or not is the biggest factor of safety.

When did you climb? It's a busy season… did you have to overtake parties?
This season we climbed in September and October. Early in the season there were few parties, but the temps were hot and we were just getting in shape. By the time things cooled off, MANY parties had taken to the wall. We averaged passing 5-6 parties each time we climbed. Strategically, we always climbed at first light to get wall parties before they were fully moving.

Why do you think you were faster now? 4 minutes is quite a leap forward...
I think we were 4 minutes faster because we are both dedicated young climbers with a ton of Yosemite experience. Nose speed climbing suited each of us well and we put in a lot of time and energy to learn the intricacies of the mountain. El Cap speed climbing in taxing physically and psychologically, but we were patient and determined.

As you mentioned, you guys have put a lot into this. So what's the draw? What makes speed climbing up The Nose so fascinating?
I've always loved the Nose, ever since I started climbing here. As soon as I climbed the Nose the first time in three days I wanted to climb it in one. Once we climbed it in a day, I wanted to link it up with Half-Dome. I evolved and so did my climbing. For me the flow up there is unique and beautiful, and going fast on the Nose is one of the most fun things I've ever done.

Last question: can you see yourself going faster?
I think it's possible to go faster but it's like free-soloing, in that just because you probably can, doesn't mean you should. I'm not done speed climbing, but I'm excited for other projects now.

08.11.2010
The Nose, new record on El Capitan by Leary and Potter
Sean Leary and Dean Potter have set a new Speed record on The Nose, El Capitan, climbing the route in 2:36:45