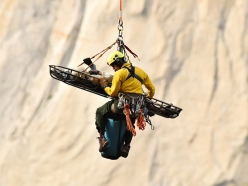 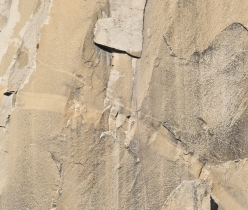 Quinn Brett rescue operation on 11/10/2017: the fall from the Boot Flake to the Texas Flake, the rope is still visibile
Photo by Tom Evans / ElCapreport.com 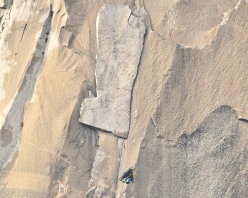 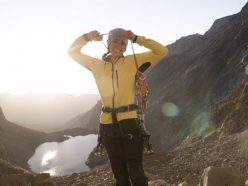 On 11 October 2017 strong American climber Quinn Brett fell and seriously injured herself while climbing The Nose on El Capitan in Yosemite Valley (USA). Friends have launched a fundraising campaign.

On Wednesday, October 11th, the talented American climber Quinn Brett suffered serious injuries as result of a long fall on El Capitan (Yosemite) while attempting to climb the famous big wall The Nose in a day with Josie McKnee.

Quinn Brett fell about 100 feet, circa 30 meters, from the famous Boot Flake and smashed into the Texas Flake below. McKnee alerted YOSAR, the Yosemite Search and Rescue Alpine Rescue service, and being a former member of the team herself she immediately began preparations for the rescue. A spectacular helicopter operation followed with the use of a longline, and Brett was swiftly plucked off El Capitan and flown to the hospital.

According to the latest information, thankfully the American climber "has no brain damage, but she is facing a severe spinal injury that will entail a prolonged recovery as well as complex transportation issues as this occurred far from home." While waiting for complex surgery, the family and friends have launched a fundraising campaign to deal with medical expenses. Over $ 50,000 have already been raised. Those who wish to make a donation are kindly asked to follow this link.

Brett is famous for having set the 2012 speed record on The Nose together with Jes Meiris, as well as teaming up with Libby Sauter in 2013 to become the first women to climb two Yosemite big walls in a day, namely The Nose and Lurking Fear in under 22 hours. In 2013 Brett established new climbs up Breakfast Spire in Greenland, while in January 2016 she, Max Barlerin and Michael Lukens made the first ascent of The Colorado Route, a 500m line up the South Face of Fitz Roy in Patagonia.