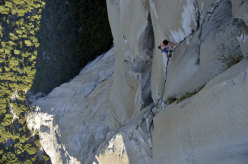 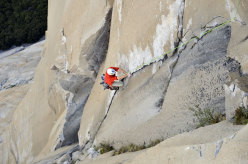 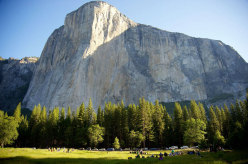 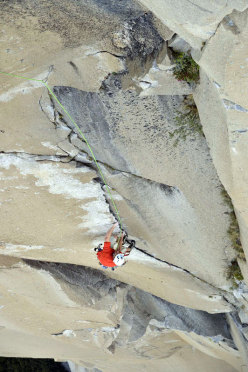 Interview with American climber Hans Florine after his 17/06/2012 speed record on The Nose, El Capitan, Yosemite set with Alex Honnold.

In all honesty Hans, did you expect such a fast time?

Yes, I figured between 5 and 15 minutes faster.

What went right this time?
We had a nice three day rest beforehand. During the actual ascent no ropes got caught and we had the gear and strategy completed dialed.

Where did you make the most speed gains this time?
Generally we were faster on all the terrain because of the rest we had taken. But we made up 5 or 6 minutes on Sunday due to our smoothness in the Stovelegs and up the easy terrain from Dolt Tower to the Boot flake.

There were climbers on the same route...
Yes, we overtook three parties, all were at belays where passing was very easy.

Tell us about your recond partner Alex Honnold...
He is competent at this kind of climbing. He is respectful of my need to satisfy safety before I'll put the pedal to the metal. I trust him to watch out for me.

Taling about safety, how light is right? Tell us about your safety margin?
I often say we need to have three pieces of gear between us or two REALLY good pieces before we simul climb. As long as we bring enough gear for that, I'm good.

On Sunday you set the men's speed record, just a few days ago Jes Meiris and Quinn Brett set a new women's record. What can you tell us about them?
Quinn and Jess are amazing, - in that they are not locals and yet they came out and put time in to get familiar with Yosemite granite. They had to have great fitness, great gear handling and placing skills, and a confidence that they could tackle 3000 ft of physical climbing. They are also excellent characters, I see they have a combination of seriousness about a goal and light hearted humor when they need to apply it.

You've climbed The Nose more than any other person. What would you say to those wishing to climb it?
I recommend spending some time getting used to plugging and unplugging gear into Yosemite granite. I also recommend trying something half as long and go at it in a day, stay urgent about everything and try to complete tasks safely and fast.

Last question Hans, for you who knows a thing or two about this sort of thing: what is the point of these speed ascents?
Finding out what is possible. Showing myself and others you can always do better. there is always a place for continual improvement.  On a more practical level, doing this shows me and others that it is possible to get some climbing done on the weekend, in a day, in an evening, in a morning, during a lunch break. It's possible, fun, rewarding, and doable. There is no reason or excuse acceptable to keep you from getting in the recreation/adventure of your choice, be it climbing or something else. Cancel your cable TV subscription and live your life instead of simply watching others!