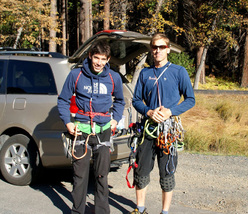 Hans Florine has got it back, the speed record on The Nose! Last Sunday, after various "warm-up runs", the American climber raced up the legendary rock climb on El Capitan in a record time of 2 hours, 23 minutes and 46 second. His partner - obviously - was Alex Honnold and after having missed out on the record last autumn by a mere 45 seconds the two have now managed to press down on the accelerator and shave a staggering 13 minutes of the old record of 2:36:45 set in November 2010 by Dean Potter and Sean Leary. This new time is relevant and impressive and the performance clearly indicated a shift in gear and also important tactical changes.

Florine is certainly an expert in Yosemite in general and The Nose in particular, and the record up this vertical "piste" was his in 2010, 2008 and also in 2002, always in company of Yuji Hirayama. For the record, Florine celebrated his 48th birthday yesterday and the fact that he is still so quick shouldn't amaze: in 1991 in Frankfurt, Germany, he was crowned World Speed Champion!

- Lynn Hill and The Nose