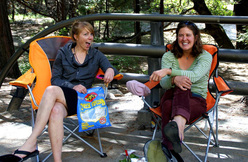 Libby Sauter and Chantel Astorga celebrating after their new speed record of The Nose, Yosemite.
Photo by Tom Evans

On 16/09/2011 Libby Sauter and Chantel Astorga established a new female speed record up The Nose in Yosemite, USA, climbing the route in 10 hours 40 minutes.

Usually when one talks about the speed records on The Nose in Yosemite one thinks about the amazing race by the likes of Hans Florine, Yuji Hiryama, the Huber brothers and, more recently, Sean Leary and Dean Potter and their attempts to climb those famous 900m up El Capitan in less than two and a half hours. But if we stop to think about it, there is obviously also a women's record there to be broken.

Well, as Tom Evans states, this record was beaten recently by the Americans Libby Sauter and Chantel Astorga who on 16 Spetember stopped the clock at 10:40, removing almost an hour and a half off the previous time set in 2004 by Heidi Wirtz and Vera Schulte-Pelkum in 12 hours 15 minutes.

While on the theme of records... and regardless of gender: as everyone knows the first free ascent of The Nose was carried out in 1993 by Lynn Hill. The ascent is widely regarded as one of the most significative in the history of climbing, yet evidently Lynn wanted to take things one stage further. A year later the American returned to the Nose and sent it all, free, in 23 hours. But this, as no doubt you'll easily understand, is a completely different story...