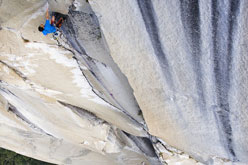 Yuji Hirayama high on The Nose, El Capitan, Yosemite, climbed with Hans Florine in a record 2:43:33.
Photo by Shinta Ozawa 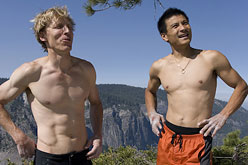 Hans Florine and Yuji Hirayama have set a new speed record on the Nose, El Capitan, Yosemite, climbing the route in 2:43:33.

After a series of practice runs earlier this week, yesterday Hans Florine and Yuji Hirayama set a new speed record on The Nose, El Capitan, Yosemite. The two climbed the 870m line in a mere 2 hours, 43 minutes and 33 seconds, beating the previous 2007 record set by Germany's Huber brothers by 2 minutes and improving on their own 2002 record by 5 minutes.

On yesterday's successful ascent Florine and Hirayama reached the Boot Flake in an hour and completed the "King Swing" 12 minutes later. Racing faster than ever before, the duo found themselves 10 minutes ahead of schedule but a series of mistakes and exhaustion slowed them down towards the finish.

As the two gained height the El Cap meadows brimmed with excitement and encouragement and included the likes of legendary Tom Frost (second ascent of The Nose in 1960 together with Royal Robbins, Joe Fitschen and Chuck Pratt) and a reporter from the mainstream "San Francis co Chronicle". According to this newspaper, Yuji Hirayama plans to return in autumn to film the ascent and attempt an even faster time. "I could have gone much more faster, yeah sure," Hirayama is quoted, adding "It's a temporary record."

The Nose, which celebrates its 50 anniversary this year, is one of the world's most famous rock climbs and was first ascended over a five week period by Warren Harding, Wayne Merry and George Whitmore. The first free ascent was carried out by none other than Lynn Hill in 1993 in what is hailed as one of the most significant free climbing achievements ever. The route had to wait a further 12 years for its first repeat, at the hands of the extremely talented American Tommy Caldwell.


P.S. For those with a little time on their hands, why not download and assemble the Ousley Creative desktop miniature of El Capitan. Ah, the wonders of the web!