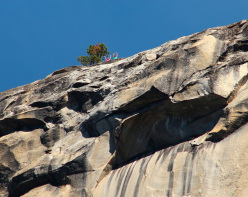 Mayan Smith-Gobat & Chantel Astorga on the top of The Nose, El Capitan, after having set the new speed record in 7:26
Photo by Tom Evans

The Nose, new women's record by Smith-Gobat and Astorga

On 23/09/2012 Mayan Smith-Gobat and Chantel Astorga set a new speed record up The Nose on El Capitan, Yosemite climbing the route in 7 hours and 26 minutes.

The women's speed record on The Nose continues to fall, and this time it's taken a serious tumble! After the 10 hours and 19 minutes set last June by the Americans Jes Meiris and Quinn Brett, yesterday New Zealand's Mayan Smith-Gobat and America's Chantel Astorga climbed the famous route up El Capitan in 7 hours and 26 minutes, chopping almost 3 hours off the previous record.

According to Tom Evans of the highly popular El Cap Reports, after a "warm-up" the other day (during which the two climbed the route in a record 10 hours 10 minutes) Smith-Gobat and Astorga set off at 3:30am. Evans stated "Mayan lead the last pitch, in a display of skill and nerve unmatched by ANY of the many climbers, male or female, I have seen do speed ascents of the route. "

With this ascent Astorga has reclaimed the title she gained during her autumn 2011 run, while for Smith-Gobat this promises to be another extraordinary season in Yosemite which follows last year's stay during which she became the second woman ever to climb the difficult The Salathé Wall.