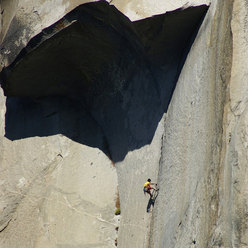 Yuji Hirayama climbing up to The Great Roof during the record breaking speed ascent of the Nose together with Hans Florine in 2:37:05.
Photo by Tom Evans 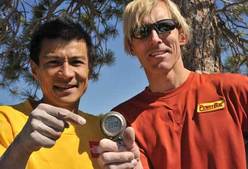 Yuji Hirayama and Hans Florine have once again broken their Speed record on The Nose, El Capitan, climbing the route in 2:37:05

Yuji Hirayama from Japan and Hans Florine from the U.S.A. have just set a new Speed record on El Capitan's The Nose, climbing the route in a mere 2:37:05, beating the previous record set by themselves in July this year by a staggering 6 minutes.

History
The Nose, which celebrates its 50 anniversary this year, is one of the world's most famous rock climbs and was first ascended over a five week period by Warren Harding, Wayne Merry and George Whitmore. The first free ascent was carried out by none other than Lynn Hill in 1993 in what is hailed as one of the most significant free climbing achievements ever. The route had to wait a further 12 years for its first repeat, at the hands of the extremely talented American Tommy Caldwell.