The Nose El Capitan: Alex Honnold races along the upper portion of the route, with Tommy Caldwell following below during their record breaking ascent on 06/06/2018. The duo made the first-ever sub 2 hour ascent, stopping the clock after 1:58:07.
Photo by REEL ROCK / Austin Siadak

The Nose El Capitan: Alex Honnold leads out The Great Roof while Tommy Caldwell jumars below during their record-breaking speed ascent on 06/06/2018
Photo by REEL ROCK / Sam Crossley 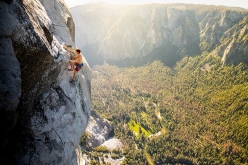 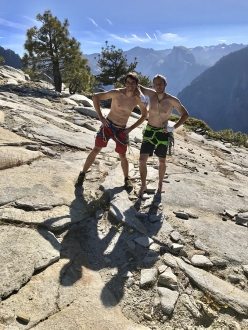 Alex Honnold and Tommy Caldwell on the summit of El Capitan on 06/06/2018 after having raced up The Nose and set a new speed record of 1:58:07.
Photo by REEL ROCK / Sam Crossley

This morning American climbers Alex Honnold and Tommy Caldwell set another speed record on The Nose on El Capitan in Yosemite. This time the duo broke the legendary 2-hour barrier, climbing the big wall route in 1:58:07.

After weeks of practice runs, and after having beaten the record twice in the space of just a week, Tommy Caldwell and Alex Honnold have now climbed The Nose on El Capitan in an astounding 1 hour, 58 minutes and 7 seconds. In doing so the American climbers have finally broken the symbolic 2 hour barrier on the route that, typically, requires three to five days to repeat.

On 30 May Caldwell and Honnold beat the record set last autumn by Brad Gobright and Jim Reynolds, climbing the world’s most famous big wall in 2:10:15. They were ten minutes shy from the goal they’d set themselves, and early onn4 June they launched upwards once again, climbing the nigh 1000 meters in 2:01:50. A tangled rope had caused them to lose precious seconds and it was clear therefore that they’d soon return in order to become the first to climb The Nose in sub two hours. Today they succeeded.

As reported previously, Caldwell and Honnold are two of the world’s most talented and expert climbers who have honed their skills on the smooth granite walls of Yosemite valley. One of Caldwell’s standout climbs is the Dawn Wall, the world’s hardest big wall freed in January 2015 with Kevin Jorgeson. Honnold for his part has countless free solos and huge linkups to his name, but without a doubt the crowing achievement that earned him worldwide recognition was his audacious free solo of Freerider on El Capitan a year ago. The two are not new to setting new standards together and in February 2014 they teamed up to complete the coveted first traverse of the major ridge line of Fitz Roy in Patagonia.

The process that led to this unfathomable sub 2-hour achievement has been thoroughly documented for an upcoming Reel Rock film. Unless Honnold and Caldwell return to try and better the record further, it is highly likely 1:58:07 will stand for a long time in the future.

I’m feeling mighty thankful for my friendship with this guy. Thanks for hauling the geriatric handicapped dad up the mountain this morning. 1:58.07. It was a heavy and thoughtful week here in Yosemite. I am so saddened by the deaths. RIP Jason Wells and Tim Klein. I can’t imagine the pain of the families. The only way to do this stuff reasonably safely is to climb with the worlds most prolific big wall climber and analyze everything carefully. Thanks Alex for keeping it safety first. This was a experience I will not soon forget. @patagonia_climb @team_edelrid @lasportivana Photo credit @austin-siadak @reelrock

08.11.2010
The Nose, new record on El Capitan by Leary and Potter
Sean Leary and Dean Potter have set a new Speed record on The Nose, El Capitan, climbing the route in 2:36:45