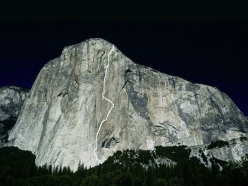 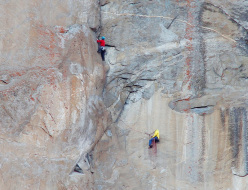 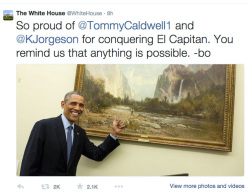 The tweet sent by Barack Obama to congratulate Tommy Caldwell and Kevin Jorgeson about their ascent of the Dawn Wall, El Capitan, Yosemite
Photo by The White House 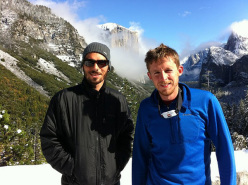 On 14 January 2015, after 19 days on the wall and years of efforts, American climbers Tommy Caldwell and Kevin Jorgeson completed the historic first free ascent of Dawn Wall on El Capitan, Yosemite, USA. Almost 1000m high and with two pitches graded 5.14d (9a), this is probably the hardest big wall in the world.

The historic first free ascent of the Dawn Wall was completed on 14 January 2015 when 36-year-old Tommy Caldwell and 30-year-old Kevin Jorgeson reached the summit of El Capitan having both successfully free climbed all the pitches up the nigh 1000m high SE Face. Their success crowns years of efforts, not only the last seven spent exploring those 32 pitches on route itself, and has on numerous occasions been described as the world's most difficult big wall free climb.

Tommy Caldwell, one of America’s most talented rock climbers and without a doubt one of the most successful Yosemite climbers of his generation, started dreaming about a line in 2007 that would unite the famous aid line Mescalito with New Dawn, two cult routes to the right of the famous The Nose. Climbing up "the blankest, most continuously steep granite wall of its size in North America" circa 60% follows the line of Mescalito, while other pitches share the lines of New Dawn, Adrift or are variations discovered by Caldwell and Jorgeson during the course of their vertical explorations.

What immediately set this route apart from the other 100 or so on the Big Stone was its sheer technical difficulties coupled with the relentless intensity of the different climbing styles: hard face climbing up razor sharp holds, tremendous cracks, thin corners, huge offwidths… the vast majority of the climbing is harder than 5.13, and the three crux pitches are estimated at, respectively, 5.14 (9a), 5.14d and 5.14d if climbed via the Dyno Pitch variation as Jorgeson did or 5.14a (8b+) if climbed via the Loop Pitch as per Caldwell. A few years ago Caldwell tried to put the route into context, stating it was "the craziest thing I’ve ever tried by a million miles."He explained further "It’s so far above and beyond anything I’ve ever been able to do. It’s a daunting task, but yet it’s amazing. It’s the next step, the progression forward in big wall free climbing."

In early 2009 Caldwell started his first serious attempts, abseiling in from above and often climbing by himself. Being alone on such an imposing face was not easy and when later that season Kevin Jorgeson asked to become part of the project, Caldwell accepted. Famed above all for his cutting-edge bouldering and dangerous headpoints, Jorgeson had no previous big wall experience to speak of but his joining would, ultimately, prove to be the key to success.

Before this was to happen though a long and rocky road lay ahead: the two spent the next seasons working the route, unlocking new sequences, rehearsing the moves, understanding the bold, mentally challenging run-out sections, planning and improving tactics… over 120 days were spent on the project that would soon become known as the Climb of the Century. At times Caldwell and Jorgeson were joined by other climbers, at times they suffered significant setbacks (Jorgeson injured his ankle and Caldwell his ribs), but never did the two consider abandoning the project. "We have perceived ideas of where are boundaries are. And maybe these are completely wrong…" Caldwell explained and, with this in mind and with the aim of finding best friction conditions, they even moved their climbing season into late November and December, often climbing at night, guided by the light of their head torches.

Every new season brought with it new stimuli and while the two broke new ground by keeping family and friends updated about about progress via the internet, in November 2014 Caldwell made the most important breakthrough of all: after six years of efforts he finally managed to free the last crux pitch, meaning that all the individual pitches had been redpointed and that now all that was missing was a single push link. Easier said than done. After resting in early December, on the 27th Caldwell and Jorgeson set off on their historic ground-up free attempt. A few days later the world tuned in and started watching with baited breath. The rest, as they say, is history.

The future will help us unravel the present and put into context what Caldwell and Jorgeson have achieved during this monumental, inspirational push and much undoubtedly remains for everyone from this achievement. There is now a new free climb on El Capitan that heralds a new dimension of difficulties for others to match and improve on. In all likelihood it is the hardest of its genre worldwide - which obviously doesn’t mean the hardest in the world - but it certainly means that in Yosemite (and on rock faces with similar ease of access) Dawn Wall has no pars. And Dawn Wall has no pars for the unprecedented, worldwide positive interest it generated that surpassed all expectations. Possibly even those of Caldwell and Jorgeson themselves, who at times we suspect may well have preferred to be slightly further away from the international spotlight. But for once climbing, thanks to them, was not placed under the microscope for its terrible deaths and disasters, but instead for its beautiful aspirations and achievements.

2009 April -Tommy Caldwell makes his first serious foray by abseiling in from above and attempting the upper section. On numerous occasions he climbs alone due to not having a partner and although he manages to unravel most of the route, some sections remain unclimbed. The project becomes known as The Mescalito Project.

2009 October - Kevin Jorgeson, famed above all for his hard bouldering, teams up with Tommy Caldwell. Together they work on the crux sections in the central section of the route and make significant progress, notably the Dyno Pitch with its 8-foot leftwards dyno 500m above the valley floor. Snow stops play.

2010 March - Caldwell and Jorgeson return to the Big Stone. The duo use the internet to update about progress. Hot temperatures force them to wait the end of summer.

2010 October - The two abseil in from the summit, establish basecamp on Wino Tower and then work the crux pitches below. They attempt the crux sections at night to get optimal conditions, just like Lynn Hill during her ground-breaking, one-day free ascent ascent of The Nose in 1994.

2010 November - After working the route for roughly 65 days over three seasons, Caldwell and Jorgeson make their first serious, ground-up push. Alone on the wall, for the first time the world watches in via twitter, Facebook and their individual blogs.

2011 October - Caldwell and Jorgeson return to the project but Jorgeson injures his ankle during an attempt to stick the famous leftwards dyno. He writes "I feel out of place without the exposure under my toes, chalk on my hands, the sounds of gear being clipped, the pain of those sharp holds under my fingers, and the monumental task at hand that we've been working for so long… To be a member of a team is to act with selflessness in the name of success. If Tommy sends without me, I will be happy to have helped push this project to completion. If not, we will be back."

2011 November - Caldwell makes an inspirational ground-up attempt with his wife Becca, but this grinds to a halt after more than a fortnight on the wall and after having climbed the first 12 pitches. Having spent more than 80 days on the project, he states. "I am still very motivated, inspired, and a bit obsessed by this project. I learn new strategies and get closer each season. I don't think I will be able to let go of it yet."

2012 November - the new autumn season brings with it renewed energy in the form of Jonathan Siegrist. Together the trio unlock a new sequence on the crux pitch and although they climb both the lower and upper section, the season ends with the hard climbing in the middle proving too difficult.

2013 October - After the two-week Shutdown which results, among others, in the closure of all US National Parks, climbing resumes on the Dawn Wall. Chris Sharma briefly joins the team. Caldwell is injured in a freak accident when his haulbag becomes detached and he is forced to temporarily abandon his attempt. Jorgeson continues and concentrates entirely on the 3 crux pitches: 14, 15 and 16.

2013 December - Caldwell recovers and despite the onset of winter there is a major breakthrough: he frees the crux 15th pitch. Jorgeson explains their tactics: "The goal is to leave the ground and climb to the top of the wall, with both Tommy and I redpointing every pitch along the way. If you fall, you just lower back to the anchor and try again. That's the style we want to do it in and only then will we call it a send. We are not forging new ground. We know exactly where and how the route goes. It's just a matter of climbing it now."

2014 November - Caldwell and Jorgeson return, once again in November to find the best conditions. The two continue to discover all-important new sequences that make the climbing more efficient. On 18 November, after six years of efforts, Caldwell frees the last hard pitch. Late at night he writes "This officially means all the hard individual pitches have been redpointed. I am so psyched my hands are shaking!" The two decide to return home and recover before their definitive attempt in December.

2014 27 December - Caldwell and Jorgeson start their Dawn Wall push. In just three days they climb the first 10 pitches, two of which are 8b+ and arrive at the crux pitches one day ahead of schedule. They establish their portal edge base camp at half-height and provisions are brought to them regularly by jumaring up from the valley floor.

2015 4 January - Unprecedented interest in the "Climb of the Century", thanks also due to publications in mainstream press such as National Geographic and The New York Times. The attempt "goes viral" and attracts worldwide attention like no other rock climb in recent memory.

2015 7 January - Caldwell succeeds in redpointing the three crux pitches, opting to avoid the Dyno and instead follow the free variation by down climbing and continuing to the left. Jorgeson on the other hand is shutdown by the 15th pitch and his attempt grinds to a halt. While Jorgeson battles against the physical and psychological strain, Caldwell spends the next days free climbing up to the Wino Tower (the 20th pitch) which marks the end of the technical difficulties. Caldwell could push on ahead, but decides to wait for his partner. This is going to be their team ascent.

2015 10 January - The day breaks overcast and Jorgeson breaks the spell: after a total of 11 attempts spread out over 7 days he finally frees pitch 15. He promptly sticks the dyno on pitch 16 only to fall off the corner slightly higher up, but frees the pitch the next day. The next days are spent free climbing up to the Wino Tower in a bid to catch up with Caldwell.

2015 13 January – Needing more time that imagined Caldwell and Jorgeson climb the next seven pitches and bivy at the Ship’s Bow. This is their last night on the wall

2015 14 January – At 15:30 Tommy Caldwell and Kevin Jorgeson reach the summit of El Capitan after having free climbed all the pitches of Dawn Wall. A small crowd of friends greets them at the summit and confirmation of the unprecedented interest in this climb comes from President Barack Obama who sends a tweet to congratulate the two climbers.