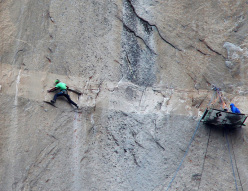 Both Tommy Caldwell and Kevin Jorgeson have reached new personal high points during their endeavour to free climb in a single, ground-up push the Dawn Wall project on El Capitan, Yosemite.

Updated: Sunday, 11 January
Perseverance pays off. After breaking the spell on pitch 15, Jorgeson has now completed pitch 16, the famous Dyno Pitch and last of the three crux pitches. He is now free climbing the pitches Caldwell had climbed last week to the Wino Tower in a bid to catch up with his partner.


Australia, Belgium, Chile, China, Denmark… Italy, Fiji, France, Germany… USA, UK… the unprecedented interest in Dawn Wall continues to sweep beyond the confines of the Yosemite National Park, around the world like no other rock climb in recent memory with almost all major newspapers, radio and TV networks dedicating significant attention to the efforts of Tommy Caldwell and Kevin Jorgeson halfway up El Capitan. Journalists from ABC’s Good Morning America and The New York Times have reportedly rolled into the valley recently, with the newspaper providing its readers with expert answers by top climbers Alex Honnold and Beth Rodden, as well as publishing a superb interactive 3D model of ‘El Capitan’s Most Unwelcoming Route.’

As to the actual climbing, something very special happened yesterday during the 14th day on the wall. Having set off on 27 December, Caldwell and Jorgeson made short work of the lower section but significant time and effort has been needed to negotiate the three crux pitches at mid-height. Caldwell managed to free climb these first, opting to climb around the famous dyno on pitch 16 by down climbing and then taking a line to the left while Jorgeson struggled hard against his personal nemesis, the 15th pitch with its razor sharp crimps right at the end of the traverse.

Time and time again a tiny hold caused Jorgeson to tumble, even at night when friction is at its very best, but yesterday, after a total of 11 attempts spread out over 7 days Jorgeson finally climbed the pitch free shortly after midday in overcast conditions. Not content, he then even managed to stick the famous dyno on the equally difficult 16th pitch, only to fall off the corner a bit higher up. Jorgeson plans to attempt this tomorrow and catch up with Caldwell who, in the meantime, has leapfroged his way upwards, all the way to the 20th pitch and the Wino Tower which marks the end of the technical difficulties.

From this point another 12 pitches of far easier terrain lead to the summit and although it’s certainly not over yet, after today’s success and after some of the most memorable climbing in their entire lives, the two are now well poised to reach the summit some time next week.


For updates stay tuned to Caldwell and Jorgeson on Facebook as well as Tom Evans and his daily El Cap report.