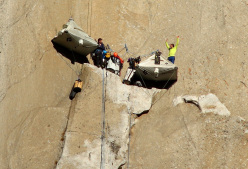 Good news from Yosemite where 36-year-old American climber Tommy Caldwell has just managed to redpoint the final crux pitch, the 5.14 (9a) outing considered the last great obstacle in his attempt to free the Dawn Wall on El Capitan in Yosemite. What now remains to be climbed free is the upper half of the route, another 15 pitches that, despite still being difficult, are significantly less intense than the middle section.

In truth the news, broken by Caldwell on Facebook a few hours ago, is "bittersweet" as despite the restday, his 30-year-old climbing partner Kevin Jorgeson unfortunately failed to free climb the 15th pitch. According to the original plan, both climbers intend to free climb the entire route, either as a leader or a second, and even though Jorgeson is now slightly behind, as Caldwell states "Tomorrow is a new day."

For his redpoint Caldwell climbed at night, something that may come as a surprise as in order to find the best friction - even in January in the midst of winter - the two have to wait until the sun leaves the Big Stone.

Another surprising fact is how much this ascent is being followed by local, national and even international media, with constant updates from all the most important newspapers, radio and television networks. While the technical terms used may at times raise an eyebrow and provoke a smile, this remarkable interest - positive at last - is clear demonstration of how much rock climbing can capture everyone’s imagination.

To find out more stay tuned to Caldwell and Jorgeson as well as Tom Evans and his daily El Cap report.