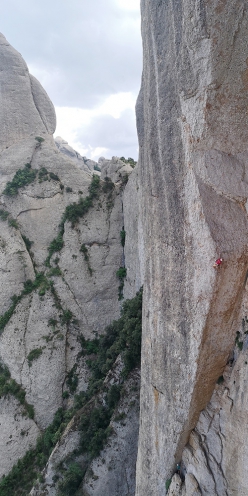 At Montserrat in Spain Belgian climber Seb Berthe has made the first repeat of Arco Iris, the 200m 8c+ multi-pitch freed by Edu Marín in 2020.

Over the years Belgium’s Sébastien Berthe has sought out some of the most famous multi-pitches in the world and by now he’s certainly one of the experienced when it comes to long, hard routes on big rock faces.  The Nose, Silbergeier, Des Kaisers neue Kleider, End of Silence, Bellavista, Fly… the list is long and impressive but now the 28-year-old from Brussels has repeated a line he considers his most difficult to date, Arco Iris at Montserrat in Spain. The route in question was an old aid climb established in 1978 by Armand Ballart and German Folch and freed in the autumn of 2020 by Edu Marín.

Berthe set out to repeat the 200m line during a visit in March this year, but decided to first get a feel for the conglomerate on the outskirts of Barcelona by climbing Tarragó (240m, 8b+) in a single day. The "bigger sister" proved a different kettle of fish, also because the  Also because the route, "sustained and incredible" line had been rebolted by Marin "with huge runouts, so the free climb does not bother the aid, which is really important there in Montserrat. I took the longest whipper in my life, about 25m, trying hard on the 8c+…" The route proved to tough "physically, technically and mentally" and so he left Spain empty-handed.

Berthe returned to Montserrat a few days ago to settle the score. A second day was spent reacquainting himself with the moves, while on day 3 he almost sent the crux pitch, only to break a vital hold at the only rest, making that section even more difficult. Climbing with Baptiste Verdin, on day 4 he fell off the crux pitch once again, rested at the belay for two hours before trying "a muerte": "I really was at the limit. During the last 10 meters I fought hard at every move, probably one of the biggest fight of my life!" After 9 hours they topped out, Berthe having led all the route clean to claim the first repeat.

According to the Belgian the grades of the pitches are half a grade lower than those suggested by Marin, except for the crux which felt "well and truly 8c+."