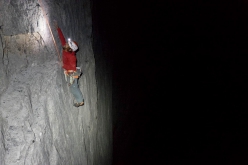 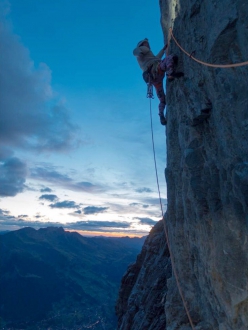 Belgian climbers Nicolas Favresse and Sébastien Berthe have repeated Odyssee, one of the hardest rock climbs on the North Face of the the Eiger in Switzerland.

With time on their hands having completed the Alpine Trilogy somewhat faster than expected and with some energy still left in their legs, Nicolas Favresse and Sébastien Berthe directed their bicycles towards the North Face of the Eiger where they completed a one day, free ascent of Odyssee. The route was established by Eiger specialists Roger Schaeli and Robert Jasper and freed with Simon Gietl in 2015 with difficulties up to 8a+. Favresse and Berthe started climbing at 4am and 18 hours later, with 33 sustained pitches below them, they reached the top of the route. As usual the two made a team free ascent, swinging leads on easier terrain and both leading the harder pitches.


Favresse, who three years previously had been forced to bail from pitch 13 with Stéphane Hanssens, made a no-falls ascent while Berthe fell once on the first 7c+ pitch and needed 3 goes for the 29th pitch.

As to the climb & bike formula, Favresse told planetmountain "Cycling across the Alps this summer gave us a totally different perspective of everything. Because everything was a lot slower, but also because we had to be light! We didn’t have tent and when it rained we had to find shelters. This kept the adventure really down to earth, close to nature. It also allowed us to connect with so many climbers who gave us a place to stay during our travels, which we probably wouldn’t have seen had we been in our van. It was nice to be reminded about how welcoming the climbing community can be!

I’ve taken a lot of planes in the past and have always struggled with being environmentally friendly, but the situation we’re experiencing because of COVID-19 made me think a little deeper and made me act. If somebody needs to do this, I thought, then I’m the one! We have an important role, also to inspire! Positive adventures like the one we’ve just had hopefully motivates others to have adventures that are not necessarily connected only to the actual climbing. The bike & climb was very different fro what I’ve experienced in the past and very adventurous. And that I think is the whole point, to find adventure. I really feel this is the way forward for me."