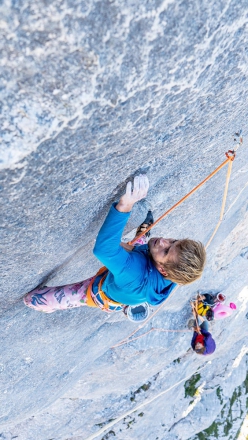 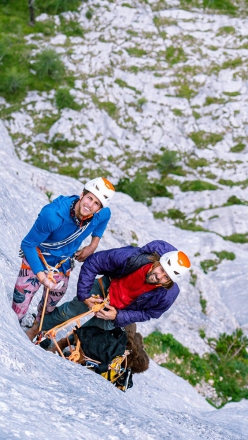 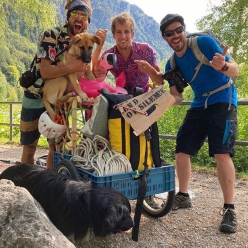 Nicolas Favresse and Sébastien Berthe with Damien Largeron and their dogs celebrating after having climbed End of Silence on the Feuerhorn in Germany. The Belgian climbers have completed the famous 8b+ Alpine Trilogy comprised of Silbergeier, Des Kaisers Neue Kleider and The End of Silence
Photo by Damien Largeron 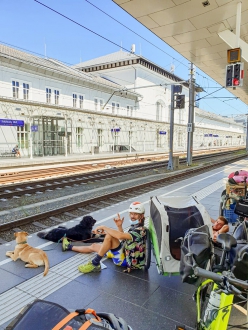 Nicolas Favresse and Sébastien Berthe taking the train home after having climbed the Alpine Trilogy. The Belgian climbers travelled to the mountains by bike.
Photo by Damien Largeron

As was to be expected, Nicolas Favresse and Sébastien Berthe have made swift work of End of Silence, the 8b+ multi-pitch climb on the Feuerhorn in the Berchtesgaden Alps in Germany freed by Thomas Huber in 1994. The Belgians fired the route in a single day, both redpointing the crux pitches after having cycled to the mountain from the Wilder Kaiser massif in Austria

Favresse and Berthe have now completed what has come to be known as the Alpine Trilogy. This consists of three 8b+ multipitch routes all established in 1994 that marked the apex of what was possibile in the mid 90’s: Huber’s End of Silence, Des Kaisers neue Kleider established by Stefan Glowacz in the Wilder Kaiser massif in Austria and Silbergeier in Switzerland's Rätikon put up by Beat Kammerlander.

The first to complete this emblematic hat trick was Stefan Glowacz  in 2001, followed by the late Harald Berger in 2005.Barbara Zangerl checked in with the first female ascent in 2013 and Favresse & Berthe are now the first to do so in a single summer after having reached each of the mountains by bike.

07.11.2005
Harald Berger Alpine Trilogy triumph
Harald Berger from Austria becomes the second person to send the Trilogy, comprised of “Silbergeier” 8b+ (Beat Kammerlander), “End of silence” 8b+ (Thomas Huber) and “Kaisers neue Kleider” 8b+ (Stefan Glowacz).
10.09.2003
Mauro Bole and Harry Berger repeat The End of Silence
Mauro Bole and Harald Berger repeat The End of Silence, 8b+ on the Feuerhorn, Berchtesgaden Alpen
06.09.2001
End of silence send by Stefan Glowacz
After just five days preparation the German Stefan Glowacz successfully redpointed "End of silence" on his first attempt. With this repeat Glowacz has become the first person to complete the Alpine Trilogy comprised of three alpine multi-pitches first ascended in 1994: End of Silence at Berchtesgaden by Thomas Huber, Silbergeier in Rätikon by Beat Kammerlander and Des Kaisers neue Kleider on Wilder Kaiser by Stefan Glowacz.