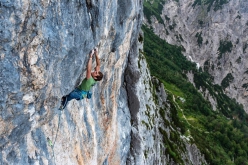 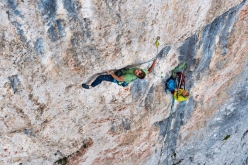 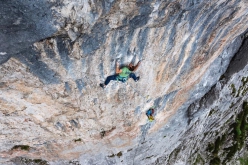 Robbie Phillips climbing Des Kaisers neue Kleider, Wilder Kaiser, Austria, freed by Stefan Glowacz in 1994. With his ascent Phillips also completed the famous Alpine Trilogy, a set of three 8b+ multipitch routes all established that same year: the aforementioned The Emperor's New Clothes, Silbergeier in Rätikon, Switzerland put up by Beat Kammerlander and End of Silence on Feuerhom in the Berchtesgaden Alps in Germany freed by Thomas Huber.
Photo by Marc Langley 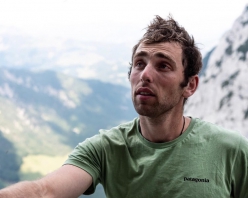 Scottish climber Robbie Phillips has become the first Brit to climb the Alpine Triology: End of Silence by Thomas Huber, Silbergeier by Beat Kammerlander and Des Kaisers neue Kleider by Stefan Glowacz, all 8b+ alpine multipitches, and all established in 1994
Photo by Marc Langley

With his repeat of Des Kaisers neue Kleider, Scottish climber Robbie Phillips has completed the Alpine Trilogy. Composed on End of Silence by Thomas Huber, Silbergeier by Beat Kammerlander and Des Kaisers neue Kleider by Stefan Glowacz, 25 years ago these three routes were considered the most difficult multipitch sports climbs in the Alps.

A few days ago Scotland’s Robbie Phillips managed to redpoint Des Kaisers neue Kleider, the 240m 8b+ first ascended back in 1994 by Stefan Glowacz up Wilder Kaiser in Austria. With his ascent Phillips also completed the famous Alpine Trilogy, a set of three 8b+ multipitch routes all established that very same year: the aforementioned The Emperor's New Clothes, Silbergeier inSwitzerland's Rätikon put up by Beat Kammerlander and End of Silence on Feuerhom in the Berchtesgaden Alps in Germany freed by Thomas Huber.

Obviously these three climbs no longer represent the cutting edge, but with a long list of illustrious climbers who have been inspired by this hattrick such as as Stefan Glowacz (2001), Harald Berger (2005) and Barbara Zangerl (2013, first female ascent) to name but three, the Alpine Trilogy remains a cornerstone of hard alpine sport climbs. And since it now celebrates a quarter of a century, we asked Phillips to shares his thoughts about the individual routes and explain the importance they hold nowadays.

THE ALPINE TRILOGY
by Robbie Phillips

End of Silence was supposed to be the "easy" one, but I found the crux pitch bloody nails!
I spent a couple of weeks working that pitch and injured my finger on it. I couldn’t fit my chubby fingers into the tiny pocket, so I basically was using my pinky and ring finger to do a deep lock-off on terrible feet in humid conditions. Maybe End of Silence is the easiest of the three as a whole, but that one sequence of moves was harder than every other pitch of the trilogy for me!

Des Kaiser Neue Kleider was my favourite experience. I think partly because it was the last, but also because I totally fell in love with the Wilder Kaiser and I had a great partner in Mich Kemeter, who basically made every day super fun. Every pitch has something to think about; even the f6’s can be tough! The 8b+ final pitch is a sting in the tail, but a beautiful piece of climbing and so long as you keep your cool (as I failed to do on my first attempt) you can climb it as it’s not too physical. Des Kaiser Neue Kleider on the whole is the hardest of the trilogy – it’s the most sustained from start to finish, but the quality of the rock is quite a bit poorer than the other two, but it makes up for that by being in an incredible setting on an exposed face, and every pitch is exciting!

The trilogy is by no means cutting edge by todays standards of hard-core sport climbing – lets be honest, Adam Ondra did Silbergeier in a day when he was 13 years old and I’ve no doubt would romp up Des Kaiser Neue Kleider and End of Silence onsight today. But interestingly I think it still offers a difficult and exciting experience in the Alpine environment that even many of the worlds top climbers would find challenging. And to think that they were put up in 1994, 25 years ago, that’s crazy! Beat Kammerlander, Stefan Glowacz and Thomas Huber are true pioneers and what they created was a guiding scope for aspiring alpine climbers to test their mettle on.

These climbs have forged a path for me in the alpine world, each one of them testing and teaching me more about how I should approach such climbs, how I should train and the style I wish to take with them. If I hadn’t embarked on this quest to complete the trilogy, I wouldn’t be the climber I am today, so in part I owe a great deal to Beat, Thomas and Stefan for creating these masterpieces. They’ve also inspired me to forge new paths in climbing, to look for first ascents of king lines! I’ve spent much of the last 10 years repeating the world’s classic climbs, but I think the future for me is in exploring new territory, opening new routes, maybe even my own contemporary Alpine trilogy?

07.11.2005
Harald Berger Alpine Trilogy triumph
Harald Berger from Austria becomes the second person to send the Trilogy, comprised of “Silbergeier” 8b+ (Beat Kammerlander), “End of silence” 8b+ (Thomas Huber) and “Kaisers neue Kleider” 8b+ (Stefan Glowacz).
10.09.2003
Mauro Bole and Harry Berger repeat The End of Silence
Mauro Bole and Harald Berger repeat The End of Silence, 8b+ on the Feuerhorn, Berchtesgaden Alpen
06.09.2001
End of silence send by Stefan Glowacz
After just five days preparation the German Stefan Glowacz successfully redpointed "End of silence" on his first attempt. With this repeat Glowacz has become the first person to complete the Alpine Trilogy comprised of three alpine multi-pitches first ascended in 1994: End of Silence at Berchtesgaden by Thomas Huber, Silbergeier in Rätikon by Beat Kammerlander and Des Kaisers neue Kleider on Wilder Kaiser by Stefan Glowacz.