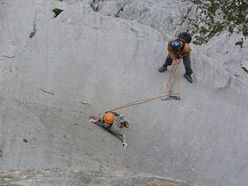 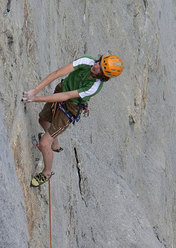 Perhaps we'll have to reconsider some new parameters with which we judge climbing ascents, the old ones suddenly look a bit out-of-date; Adam Ondra is currently showing us where the future lies. The 14-year-old climber from the Czech Republic is touring France and Switzerland with lightening fast crag-stops that are really leaving their mark. On 1 August Ondra repeated "Abysse", 9a in the Gorges du Loup in just three attempts, on 2 August he on-sighted "Hot Chili beans Volcano" 8b+ at the same crag, then a day later he turned up at Switzerland's beautiful Voralpsee and sent "Speed" 8c+ fifth go... Abysse and Speed, two top-end routes, two completely different styles, first ascended by top-end climbers Alexandre Chabot and the legendary Beat Kammerlander.

But that's not all. Adam Ondra also decided to test his talent in another vertical sphere, that of multi-pitches in the mountains. He decided to do so by climbing not any old route, but by repeating an established line first ascended by none other than (once again) Beat Kammerlander: Silbergeier 8b+. This route is a symbol of the Rätikon and was first ascended from the ground up in 1993 then freed in 1994 by Beat. Subsequently it was repeated by Peter Schäffler in 1997, Stefan Glowacz in 1998 and by a very quick Pietro Dal Prà  in 1999.

In the meantime there have obviously been other ascents, but no one has been as quick as Adam on 27 July. The young climber needed circa 8 hours to send the route which he redpointed together with fellow countryman Ondra Benes who had repeated the line in 2006. These are the details of Adam's ascent: P1: 8b/b+ - PP - 3 attempts; P2: 7c+/8a flash; P3: 8a+ flash; P4: 7a+ flash; P5: 8b+ PP - 2 attempts; P6: 7c+/8a PP (short practising of the beginning, the rest flash). Note Ondra's precise ascent description: PP, pinkpoint, i.e. with the quickdraws already in place.

We're in touch with Adam at the moment and we'll find out more before he travels to Italy at the start of September for the nominations of the Arco Rock Awards 2007. We'd like to find out how he interprets climbing, how (don't laugh, given his age) climbing has changed over these past few years and how he sees sports climbing developing in the future. With results as impressive as these (and Adam is not the only young climber capable of such ascents) we're really looking forward to a new dimension of top end ascents, both at crags and in the mountains. New climbs which come about not after 3 attempts on a 9a, but after months and months of trying... who knows what the future holds in store.