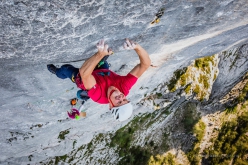 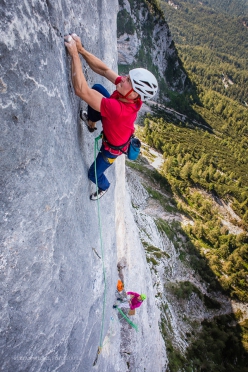 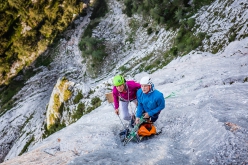 Slovenian alpinist Luka Lindič has repeated End of Silence up Feuerhom (Berchtesgaden Alps, Germany). Freed by Thomas Huber in 1994, this multi-pitch 8b+ is considered one of the reference routes for alpine sports climbs.

Slovenia's Luka Lindič has repeated one of the most famous routes in his backyard mountains, namely End of Silence up Feuerhorn in Germany’s Berchtesgaden Alps. This 11-pitch outing was freed in 1994 by local Thomas Huber and is famous not only because 25 years ago it was considered one of the hardest in the Alps, but also because with Silbergeier in Rätikon and Des Kaisers neue Kleider on Wilder Kaiser it formed part of the so-called Alpine trilogy.

Lindič opted to test himself ground-up. In addition to the 8b+ technical difficulties, this at times involved dealing with long runout between one bolt and the next. After two days of effort - the first with Luka Krajnc and the second with his partner Ines Papert, Lindič managed to work his way to the summit. With the aid of a static rope he then worked the moves and sequences on his own, and after a first failed attempt he succeeded in reappointing the line on 23 August, belayed by Papert.

After his successful ascent Lindič stated: "With its 11 pitches and difficulties up to 8b+ it is still among the most difficult alpine free climbs. This climb definitely opened my eyes to see what I am capable of in difficult rock routes. I’ve never climbed harder than 8b+ in a crag and never really focused on only rock climbing in my career. Because of this, I didn’t dare think I’d be able to climb a route like this."

We are the dream team! Something I am more and more sure with any of the challenges one of us or both of us face. Have no words yet for the send of “End of Silence” today. Simply living the dream with @inespapert . #arcteryx #lyofood #totemmt #rockclimbing #multipitch #berchtesgaden

14.08.2012
Barbara Zangerl repeats End of Silence on the Feuerhorn
Austrian climber Barbara Zangerl has made the first female ascent of End of silence 8b+, Feuerhorn.
10.09.2003
Mauro Bole and Harry Berger repeat The End of Silence
Mauro Bole and Harald Berger repeat The End of Silence, 8b+ on the Feuerhorn, Berchtesgaden Alpen
06.09.2001
End of silence send by Stefan Glowacz
After just five days preparation the German Stefan Glowacz successfully redpointed "End of silence" on his first attempt. With this repeat Glowacz has become the first person to complete the Alpine Trilogy comprised of three alpine multi-pitches first ascended in 1994: End of Silence at Berchtesgaden by Thomas Huber, Silbergeier in Rätikon by Beat Kammerlander and Des Kaisers neue Kleider on Wilder Kaiser by Stefan Glowacz.