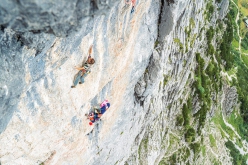 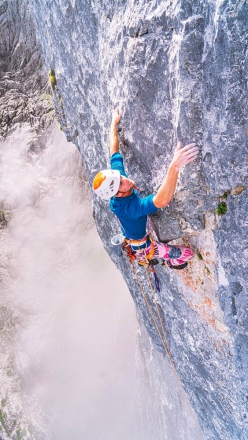 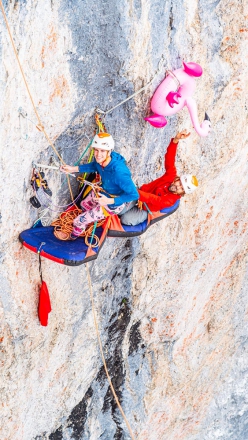 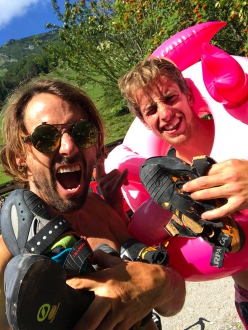 Seb Berthe and Nico Favresse have made a single-day, ground-up repeat of Des Kaisers neue Kleider (240m, 8b+), first ascended by Stefan Glowacz in the Wilder Kaiser massif in Austria in 1994.

The king is no longer naked! Actually, the Emperor’s New Clothes are decidedly motley coloured thanks to Sébastien Berthe and Nicolas Favresse who a few days ago managed to repeat Des Kaisers neue Kleider in Austria’s Wilder Kaiser massif. The Belgians are touring the Alps on their bikes and after swift ascents of Silbergeier and Headless Children in the Rätikon massif, they have now repeated this classic test on the Fleischbankpfeiler established and freed by Stefan Glowacz in 1994. While it’s clear that Favresse and Berthe are well-capable of sending a route this calibre even after their long bike ride east, as usual it’s the details that make this ascent interesting: without previous attempts, in a single day. And single night to be precise.


We started Saturday morning, it was still raining but Seb was so motivated that he managed to drag us to the wall. We thought we’d just leave the gear at the base but when we eventually got there we decided to give it a go, even though the first pitches were wet. It was kind of slippery but by being really careful we still managed to climb and then all of a sudden we were at the base of the first really hard pitch. The holds were wet and we kept slipping off, but after about 5 or 6 tries we both managed to redpoint it.

Seb actually redpointed it first and I said I’d give it one last go, otherwise simply support his ascent, but I succeeded and so we continued attacking the route together to the end. We reached the last hard pitch just after darkness and this was a really big fight: we pushed on through the night and Seb sent it at about 3am after perhaps 6 tries, I sent at about 4am after about 10. We both led all the hard pitches and swung leads on the easier pitches. As we reached the end of the rappels dawn broke and the light returned.

So far the trip looks like it’s working out really well with the bikes and dogs. The cycling doesn’t seem to be affecting our climbing level despite the long days on our bikes. Perhaps it’s the opposite actually, perhaps this nice cardio exercise is getting us into even better shape. We really think our new magic weapon is the bike! We think it’s the future for climbing hard multi-pitches and giving so many goes with getting too tired. Next stop End of Silence!