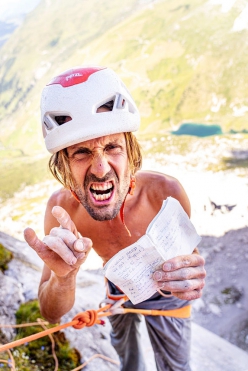 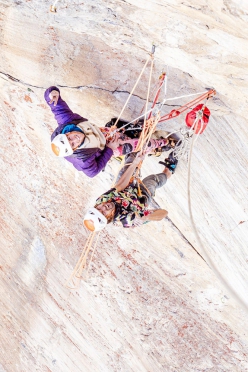 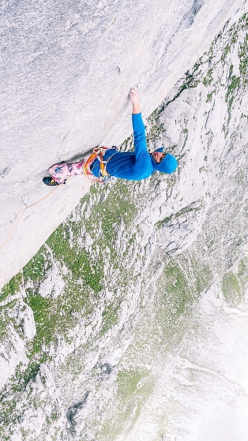 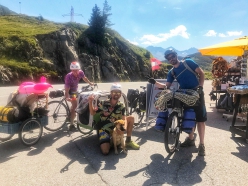 Nicolas Favresse, Sébastien Berthe, Damien Largeron and their dogs Bintje and Krou during their month-long bike and climbing trip across the Alps
Photo by Damien Largeron

Seb Berthe and Nico Favresse are currently on a bike and climbing trip across the Alps. The Belgian climbers have made swift work of Silbergeier and Headless Children in the Rätikon massif and are now cycling towards Wilder Kaiser in Austria.

Like many, Sébastien Berthe and Nicolas Favresse are concerned about reducing their CO2 impact and as a result they recently set off on a month-long climbing trip that, for transport, relies on trains or their own muscle power to pedal their mountain bikes. The aim is to spend a month climbing some of the most emblematic multi-pitches in the Alps.

Accompanied by their two dogs as well as climber and photographer Damien Largeron, the Belgians took a train to Bludenz in Austria and then cycled straight up into the Rätikon massif where they made swift free ascents of the Beat Kammerlander überclassic Silbergeier in a single day; both climbers led the hard pitches and while Favresse had actually already redpointed the line over a decade ago, Berthe’s free ascent comes after two days of attempts seven years ago.

After a short rest the motley crew walked to the other side of the massif to try another classic high-end multipitch, Headless Children. 27-year-old Berthe remarkably made a no-falls ascent of this 260m 8b, flashing and onsighting all the hard pitches. Favresse took a couple of falls prior to his successful redpoint ascent, and this is of particular value to the 40-year-old since almost twenty years ago he had chosen this as his first proper multi-pitch climb. Back then he and Sean Villanueva had, as he told planetmountain.com "Somewhat of an epic time. We didn’t know that it hadn’t been freed and that the route needed gear. Basically we got spanked! I’m impressed by our effort back then, with no tick marks, no chalk, nothing. Of course we did’t free it, but at the same time I remember this as on of our best climbing adventures ever!"


After having fallen into oblivion for years, Headless Children is experiencing a resurgence in popularity and the two were joined on the wall by Yannick Glatthard and Jonas Schild who also redpointed the route, too.

As we go to press the "climb, bike and dog team" has just crossed the Arlberg and it slowing moving east towards Innsbruck and then the Wilder Kaiser massif. In order to keep up-to-date about their progress check out their IG accounts. This is only just the beginning.

The first climbing day of our #zeroco2 bike/ dog adventure starts well for @sebertheclimber and I We both sent Silbergeier in a day, first day on the route, 11 years after my previous ascent of this masterpiece of climbing ! For Seb, it was his first time sending the route, although he had tried the route 7 years ago. We are now moving onward to the next target and also taking advantage of a couple rest days to find some good swimming spots for our pink flamingo @damienlargeron @patagonia_climb @patagoniaeurope @scarpaspa @petzl_official @arkose.climbing @julbo_eyewear @lyofood @hard.bar @agripp_climbingholds @samaya_equipment #noplacetoofar

"Headless children" flash Ratikon covers so many good routes but this is a special one : steep wall, perfect holds and crazy moves! All the pitches bring something to the adventure, such a gem! So psyched with my no-falls day due to the best flash you can have from @nicofavresse who sent the route as well of course flashing such a multipitch toute can be really interesting mentally, no mistakes allowed, especially when you think the job is done and the last pitch comes: a pretty hard and technical slab graded 7a, I almost shi* in my lycra pants Congrats to @jonasschild and @yannick_glatthard, for their sent as well, see you in another route I hope! I guess the route saw more ascents in a day than ever before . Bye bye ratikon, let's ride our bikes again! @damienlargeron @patagoniaeurope @petzl_official @scarpa_de @lecomte.alpirando @escalpades @revolutionclimbingteam