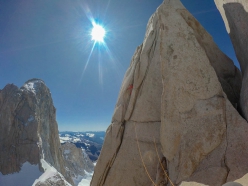 Sean Villanueva close to the summit of Aguja Poincenot in Patagonia while making the first repeat and first free ascent of Historia interminable with Nico Favresse
Photo by Nicolas Favresse, Sean Villanueva 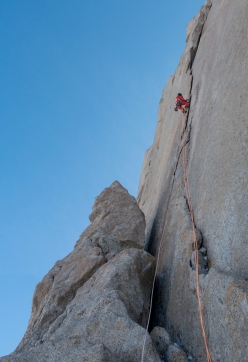 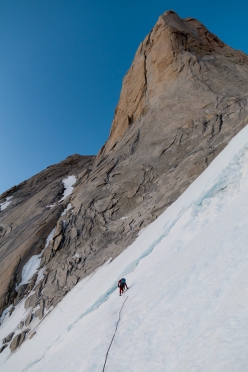 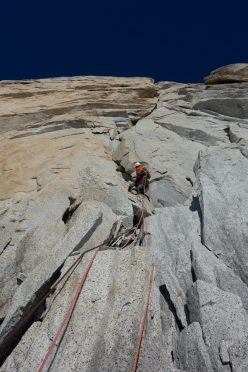 Belgian alpinist Nicolas Favresse reports about another two routes climbed with Sean Villanueva O’Driscoll on Aguja Poincenot in Patagonia: Beggars Banket (7a, 400m) first ascended on the East Face directly above the Whillans ramp and, on the South Face, the first repeat and first free ascent of Historia interminable (6c, 800m).

With a relatively warm weather window of two days we thought it would be ideal to stay cool by attempting something on the impressive shady south face of Aguja Poincenot. Rolando Garibotti, the author of the guidebook Patagonia Vertical, had pointed out a couple of possible new lines which in the pictures looked promising.

After the approximately 10-hour approach we finally reached the base of the wall, which struck as being far steeper and less featured than it had appeared in the pictures. With no portaledge, only 3 pitons, a couple bolts and 2 days of good weather, we quickly realised we had not come suitably prepared for such difficult wall.

We turned on our line finder radar and quickly scanned another feature a hundred meters further to the left. The cracks looked clean and continuous and actually turned out to be just as good as they appeared. Quickly though we discovered that other radars had scanned this line before us, as we ran into old pitons, old ropes, rusty bolts and an abandoned broken portaledge.

Anyways, we kept going just as if we were the first to place our hands into the perfect cracks, and really enjoyed it! The crux pitch was a 30 meter offwidth protected with only a Camelot #6, for the most part fully open! Although Sean has developed a love for offwidth climbing over the years, a game of rock paper scissors had decided I’d be the one to lead this pitch.

It took me 2 hours of intense battle, earning every centimetre and engaging my entire body both physically and mentally, to reach the top of the wide crack… Everything after this was just a piece of cake for me. Even the pain caused by all the wounds on my knees, elbows, shoulders and ankles was nothing compared to fighting for my life in that offwidth. The best thing Sean could say, out of compassion, was to tell me I was obviously lacking offwidth climbing technique.

It turned out we had made the first repeat and first free ascent of a route called Historia Interminable, established in 1987 by a team of Spanish climbers. For me it was the first time on top of Cerro Poincenot, so I was very happy!

A few days later another weather window arrived. This time the ventana was accompanied by high winds which reduced our options while choosing our next target. Our initial idea was to attempt a new route on the East Face of Poincenot, a wall known to be protected from the wind. Unfortunately though we didn’t have enough time to recuperate our gear we’d stashed at Nipo Nino, our advanced camp on the other side of the mountain, so we reckoned a new route wouldn’t be an option.

However, after talking to a few friends and the amazingly generous climbing community in El Chalten, within just a few hours we managed to gather more gear than we needed for this mission!

The climb turned out to be quite adventurous with lots of wide cracks filled with ice, providing very few possibilities for adequate protection. We also encountered a couple of interesting sections with chimneys chocked by overhanging ice, leaking like a shower which we only managed to breach with the help of an ice axe, a good rainproof jacket and wet underwear. Thankfully we were happy to discover that the Patagonia winds also work perfectly as a hair dryer!

I climbed the last pitch and belayed right below the summit, surprisingly protected from the high winds. Then we each made a quick crawl to the top to feel the power of nature and tick Poincenot for the second time. We named our new route Beggars banquet after the famous Rolling Stones album and because we had borrowed all the gear we used to climb it.