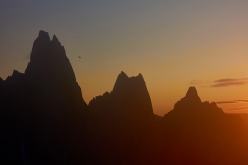 Fabian Buhl paragliding off the summit of Cerro Torre in Patagonia early on 7 February 2020. The 29-year-old is the first to do so after reaching the summit by his own means.
Photo by Sean Villanueva 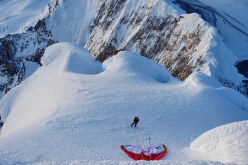 Cerro Torre & Fabian Buhl: preparing for the take off. 'Honestly, I don’t know if I’d have done it with more experience, starting with a tailwind is always a bad idea.'
Photo by Fabian Buhl archive 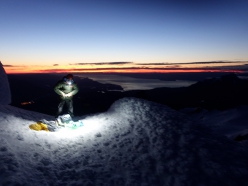 Interview with 29-year-old German mountaineer Fabian Buhl who on 7 February flew off Cerro Torre in Patagonia with his paraglider.

As documented, on 7 February 29-year-old German mountaineer Fabian Buhl climbed Cerro Torre in Patagonia via the West Face Ragni route and then paraglided off the summit mushroom at dawn. This wasn’t the first flight off the Torre; in 1988 the Germans Matthias Pinn, Michael Pinn and Uwe Passler completed the first flights, while in 1991 South Tyrol’s Roman Tschurtschenthaler also launched his paraglider, but all four had been transported to the summit by helicopter. Buhl is the first to fly after having climbed the mountain by his own means. Here’s how.

Cerro Torre climb & fly. Not bad for your second trip to Patagonia…


Yes, not bad at all! Although from a climbing point of view I have to admit it wasn't anything groundbreaking; in all honesty I would have loved to climb something even bigger during this window, such as establishing a new route somewhere on Cerro Torre or trying the Torre traverse. Having said that, the flight off the summit mushroom was certainly a great experience.

Fabian, we know you for your bouldering, for your hard trad climbs, for alpine multi-pitch routes and big routes in the mountains. Not for paragliding though. For how long have you been paragliding for and why did you start?
For a bit more then a year. I just started because lots of friends paraglide and I was intrigued, I thought there might be potential for my alpinism. Truth be told, I don’t have a license and nor do I know all too much about paragliding. That’s why I’d like to gain more experience to do more and even bigger flights.

So when did you first think of paragliding off the summit of Cerro Torre?
I gave it some serious though 5 days before I did it, when I saw the weather window building up. But the idea of flying off a mountain like Cerro Torre goes back way longer.

5 days before So presumably this wasn’t your main project?
No, my main project was to climb with Colin Haley and establish a new route on the Torre south face, which we abounded after 2 forays since the rock quality was too bad and we judged that conditions were too dangerous, so we bailed.

You arrived in Patagonia and waited 5 weeks for this weather window
Yeah, as usual this waiting game was long and nerve-racking. But you need to be zen with the weather.

What did you know, and what didn’t you know?
Well of course I didn’t know if we’d be able to reach the summit of Cerro Torre, since nobody had reached it before this season. I knew that others had paraglided before me, all helicoptered to the summit: Matthias and Michael Pinn in 1988 with Uwe Passler, and also Roman Tschurtschenthaler in 1999. Aaron Durogati wanted to try but unfortunately the mountain didn’t give him a chance to climb it. That’s all I knew. I had no clue in which direction I might be able to launch, so I decided to just go to the summit and have a first look for myself.

This was your first time on Cerro Torre
It was pretty cool to be in that surreal landscape with those huge amounts of rime ice. The Ragni route is a very special and unique climb, surely the king line on Cerro Torre. We climbed as two teams, the Frenchmen Christophe Ogier, Mathieu Perrussel and Jean Baptiste Tapie, and the Raphaela Haug from Germany, Laura Tiefenthaler from Austria and I. The ascent was relatively smooth, we had a good strategy and basically it turned out exactly as planned. On the first day we approached from Noruegos and climbed to the top of Elmo, then came the best day where we opened everything until the last pitch. I played Rock paper scissors with Christoph for the final pitch and he won, so he went on to tunnel up another 25 m. After he came descended totally soaked Edoardo Saccaro took over and finished the last part. We settled in for a bivi, since the Italian team didn’t have bivy gear and therefore needed to go to the summit before us in order to descend to the Elmo again. For me that was absolutely fine, as in case I wanted to fly early the next morning.

What was important for you during the ascent?
I wanted to fly from the summit, but I was extremely keen on playing my part during the ascent. I carried my paraglider and my share of the gear. That was important to me. Apart from that, I knew that the weather window was big, that we didn’t have to be super efficient or fast. We had time and the entire climb was quite relaxed, completely different to when I want to climb something really difficult. I mean, I brought sardines and avocado with me to the bivi ;-). I knew that ideally I wanted to be on the summit on the 7th, as this was the day with the least wind.

You decided to take off early in the morning. Why? What conditions do you need for take off and were they ideal?
During the day you have crazy thermal activities in these mountains and there’s always much more wind. I wanted to either fly at dawn or dusk in order to have optimal conditions. Normally a slight breeze head-on would be good., unfortunately it wasn’t to be so I had to consider other options.

The take off looks… scary! How dicy or controlled was it?
The start felt super sketchy as I launched with the tailwind. Honestly, I don’t know if I’d have done it with more experience, starting with a tailwind is always a bad idea. But I started to run and felt there was a gust from behind that turned the wing a bit. So on the lip, where the snow gets steeper, I instinctively decided to jump into the wing and load it fully. I never thought I’d get so close to the edge of the snowslope. I jumped into the wing and it accelerated, fast enough for me to get lift and fly away.

During take off some of the lines were tangled Fabi. When did you realise this and does this happen often?
Normally it never happens. I had a knot on the C riser and hadn’t noticed it, perhaps it knotted from compressing the wing so much. I should have looked more carefully before taking off, that was plain stupid.

So how was the flight? What was the best thing?
The flight was super calm. At first I want to fly over the Laguna but then the flight between Torre and Fitz Roy range was just too incredible and I decided to enjoy it fully and rather walk a little further back to town. I was in the air for about 17 minutes.

What about the landing?
I landed on the Torre Glacier, on the side of nunatak. The landing place there is super obvious, flat, closed off and just perfect. I decided to land there as I had a lot of headwind and could land perfectly in control. I didn’t want to fly anywhere closer to town to avoid a riskier landing.

What about the others?
They descended traditionally and returned without problems to El Chalten a day and a half later.

So that’s the wrap! Last question about climbing and flying. What does paralpinism represent to you?
First of all I'd like to I really would like to thank the whole team for the amazing experience in Patagonia and Rolando Garibotti for the amazing detailed infos and weather updates! As to what paralpinism represents? Lot’s of fun no need to rappel. So it’s a combination of having fun while climbing and also while flying, without the often complex descent. At present I can see the advantages of paralpinism on routes which are not extreme. When performing high end alpinism, even the lightest wings equate to at least a day of food for 2 people. So for two people who wish to fly, you could have 2 more days in the mountains for an alpine style ascent. If I have to choose, I would always prefer more food and have to walk down or descend by rappel, instead of having a glider. Which I’m not even sure I can use once I’m on the summit. Paralpinism certainly opens doors, but not all of them.