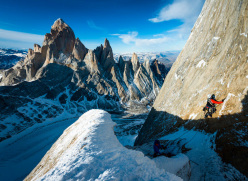 Ralf Weber climbing, belayed by Stephan Siegrist, up the final rock pitch prior to the summit ice of the route Exocet.
Photo by visualimpact.ch / Thomas Senf 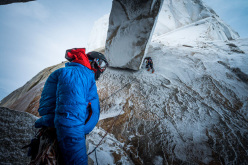 After an initial attempt abandoned due to blustery winds, the trio set off on 30 July to reach the Bridwell Camp from where they continued the next day to the Niponino Camp and on to Col Standhart where the Exocet route begins.

Deep snow and hard ice covered the rock face and cracks making progress far slower and far more arduos than planned, and after another bivy and another strenuous climbing day with temperatures down to -20°C they reached the 2730m high summit in the dying hours of the day. Siegrist commented "As the sun set the full moon appears, what a sight!" The Swiss climbers bivied just below the summit mushroom in the "most beautiful bivouac ever" and then abseiled back down to the glacier on 2 August.

Cerro Standhardt's Exocet route was first in climbed 1988 by the Americans Jim Bridwell, Greg Smith and Jay Smith. Two years later it received its first winter ascent at the hands of the Austrians Tommy Bonapace and Toni Ponholzer, while the first solo was carried out in 2010 by American alpinist Colin Haley.