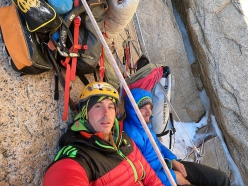 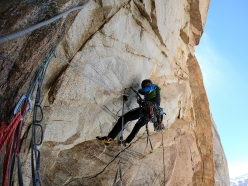 The video of Matteo Della Bordella and Matteo Pasquetto attempting the east face of Cerro Torre (Patagonia) up the British Diedre route.

Precisely a year ago Matteo Della Bordella and Matteo Pasquetto attempted the east face of Cerro Torre, via a line "so beautiful, elegant and difficult that it’s difficult to imagine anything better, namely the striking corner the righthand side of the face, also known as British Diedre."

About 80m before reaching the end of this legendary corner - attempted between 1980 and 1981 by Philip Burke and Tom Proctor - Della Bordella and Pasquetto were forced to retreat, but the Italians are currently back in Patagonia to try this route again. They are joined by Matteo Bernasconi who last year had injured his knee shortly before departure.

While awaiting for news from the end of the world, here’s the footage of 2019 attempt.

08.09.2016
Cerro Torre solo winter attempt, Markus Pucher stops 40 meters below summit
Climbing along the Ragni route, on 3 September 2016 Austrian alpinist Markus Pucher climbed to within 40m of the summit of Cerro Torre during his attempt to carry out the first winter solo ascent of this iconic mountain in Patagonia.

16.02.2016
Cerro Torre SE Ridge Compressor Route: second free ascent. Interview with Mikey Schaefer
Interview with American alpinist Mikey Schaefer who, together with Andrew Rothner and Josh Wharton, carried out the second free ascent of the Southeast Ridge Compressor Route on Cerro Torre in Patagonia from 4 to 6 February 2016. The first free ascent was carried out in 2012 by David Lama and Peter Ortner.