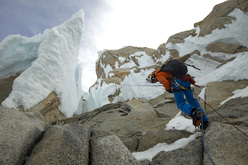 The entire film A Snowball's Chance in Hell, featuring Austrian alpinists David Lama and Peter Ortner making the first free ascent of the Compressor route on Cerro Torre, Patagonia, carried out in January 2012.

After a controversial first attempt in 2009 and a foiled attempt in 2011, in winter 2012 a rare spell of unbelievably good weather provided Austrian alpinists David Lama and Peter Ortner with the opportunity of making the coveted first free ascent of the famous Compressor route, established by Cesare Maestri up Cerro Torre in Patagonia.

As many will remember, Lama and Ortner achieved their masterpiece just days after American alpinists Jason Kruk and Hayden Kennedy chopped over a hundred bolts off the Maestri route and in many ways this hotly debated act overshadowed the Austrian's success, pushing this extraordinary feat out of the international limelight.

The ascent was documented in A Snowballs's Chance in Hell, a film which follows three years of efforts, trials and tribulations and which has now been made available free of charge. It's worth remembering that the second free ascent of the Southeast Ridge - or Compressor Route - on Cerro Torre was carried out from 4 to 6 February 2016 by Mikey Schaefer, Andrew Rothner and Josh Wharton.

>> WATCH THE VIDEO ON: www.redbull.tv

16.02.2016
Cerro Torre SE Ridge Compressor Route: second free ascent. Interview with Mikey Schaefer
Interview with American alpinist Mikey Schaefer who, together with Andrew Rothner and Josh Wharton, carried out the second free ascent of the Southeast Ridge Compressor Route on Cerro Torre in Patagonia from 4 to 6 February 2016. The first free ascent was carried out in 2012 by David Lama and Peter Ortner.