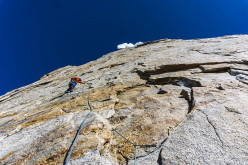 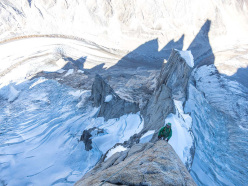 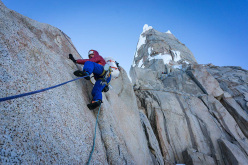 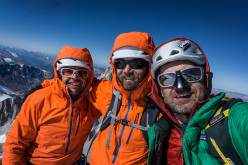 Interview with American alpinist Mikey Schaefer who, together with Andrew Rothner and Josh Wharton, carried out the second free ascent of the Southeast Ridge Compressor Route on Cerro Torre in Patagonia from 4 to 6 February 2016. The first free ascent was carried out in 2012 by David Lama and Peter Ortner.

From 4 - 6 February 2016 the American alpinists Mikey Schaefer, Josh Wharton and Andrew Rothner completed the coveted second free ascent of the SE Ridge, more commonly referred to as the Compressor Route, on Cerro Torre in Patagonia. Famously freed in January 2012 by David Lama and Peter Ortner, this line has recently seen a flurry of recent repeats (including that of Matteo Della Bordella and Silvan Schüpbach, for example). Yet the second free ascent of the Compressor Route was still up for grabs and, thanks to its awesome reputation, a plumb objective. With years of hard alpine climbing under their belts, often down in Patagonia, Schaefer and Wharton didn't let themselves be intimidated. Before setting off from El Chalten they armed themselves with a secret weapon: Andrew Rothner, a climber who tends to shun the limelight, whose superb bouldering skills would prove ruthlessly effective high up on Cerro Torre... For the record, this was Rothner's first alpine route, the crux pitch happened to be his first lead in Patagonia and the summit mushroom was his first ever ice lead.

Mikey, you and Josh are well-known names in the alpine community, Andrew less so. Can you introduce us to him?

I actually met Andrew the night before we hiked into the Torre valley and am still just getting to know him. He is obviously a very talented climber, primarily a boulderer though. He isn't well-known as he generally keeps to himself and prefers this. Josh saw the talent that Andrew has and knew that with a little coaching he'd be perfect for the mission even though he'd never climbed in the mountains before. I never once worried that Andrew was with us. I knew that if Josh wanted him on the team it was a good idea.

A good idea indeed, carried out when?
We started from Norwegos camp at 4:30am circa on February 4th. And returned to camp the morning of the 6th at about the same time.

So how did you deal with the climb?
Our main goal was definitely a free ascent. We knew if we had good conditions and the right weather, just getting to the top of Cerro Torre wouldn't be an extreme challenge. We have friends who'd previously made "fair means" ascents of the SE ridge and it wasn't described to us as being extremely difficult. We broke the climb down into what made the most sense considering the strengths of our team. Which generally means Josh does a lot of the leading as he one of the strongest and fastest climbers I know. Josh lead from the Bergschrund to the shoulder, with Andrew and I mostly simul-climbing below. I took over at the shoulder and led to the base of pitch 12.

The crux boulder problem pitch...
Yes. After a quick break Andrew set off on what was the first pitch he'd ever lead in Patagonia. Very impressive. He fell on his first attempt after nearly getting the onsight. He then spent a little time figuring out the move then returned to the belay for a short rest, after which he fired the move with a little bit of effort on his next try. Josh followed fairly easily on his first try. I fell on my first go but figured out the beta and did it on my next effort.

Lama told us the crux pitch really suited his bouldery style… So was Andrew your secret weapon ;-)?
Andrew was indeed our secret weapon! Like Lama though we also thought the crux fit our styles, as we all enjoy technical climbing.

And then?
We bivvied a couple pitches above and the next morning Josh took over for the rest of the climb, leading through the ice towers and to the top of the headwall. Andrew lead the short and easy mushroom pitch which was also his first ice lead ever!

Any more thoughts about those famous pitches on the upper headwall?
The upper headwall pitches really reminded me of all the climbing I've done on Middle Cathedral in Yosemite. A tad run out but the gear was there when it was needed. We actually thought the most serious pitch on the route was the second pitch of the headwall, which was extremely loose and fairly dangerous though the climbing wasn't necessarily that hard. We had the added advantage of having a team in front of us so we saw little bits of chalk which made the route finding easier and probably led to our overall feeling that the pitches weren't as hard as they'd been described. Definitely an incredible location to be doing such wild climbing!

What was important during the ascent?
The most important thing for us was to not actually try and move super fast, but instead climb at more casual and efficient pace so we could be fresh for the free climbing.

You succeeded in the second free ascent. Presumably this was your prime objective in Patagonia this season, right? And how much did you know about the route beforehand?
We had a our eyes on a few objectives this year and settled on the SE Ridge partly because we showed up in El Chalten just a day before the weather was meant to be getting good and it felt like the most realistic goal. I'd never been on the SE Ridge before but Josh had made two attempts previously. On one of the attempts he climbed partly onto the headwall before turning back, so he definitely had a bit of first-hand knowledge when we went up there. We also gathered info from Rolando Garibotti as well as our friend Matteo Della Bordella who has just climbed it a couple weeks before. Josh and Andrew also spent some time looking at David Lama's film about his free ascent.

Talking about Lama: now that you’ve repeated the route, what can you say about his first free ascent in 2012?
David's FFA was very impressive! It takes someone with a unique perspective and the right amount of confidence to look beyond what others think is possible and this is what David did. Many people thought free climbing the SE Ridge would be impossible or extremely difficult but David went up there regardless and proved many wrong. We owe a great deal of our free ascent to him and his attitude of what is possible.
Josh and Andrew also went up there with their own idea of what is possible. Josh is very good at having an objective view of what he can do and not letting other's ascents dictate his own thinking. After studying photos, watching David's video and Josh's first-hand knowledge, he knew he could free climb the crux 8a pitch. At first, I was unfortunately letting a lot of the hype and media about the route intimidate me and almost didn't try the crux pitch because of this. I always assumed it would be too hard for me just because of the rating. Thankfully Andrew and Josh made the pitch look very climbable and I gave it try a try as well and succeeded on my second attempt.

Were there any special moments you'll treasure?
It was cool to be up there with a few other teams, especially Argentines Gabriel Fava and Martín López Abad. This was an important ascent for these guys personally and also for the Argentine climbing community. They were as excited as I have ever seen anyone about climbing and this was motivating for all of us.

The weather in Patagonia has got worse now, but until only a few days ago there seemed to be a startling number of outstanding ascents… is there anything that stands out in particular?
There have indeed been many amazing ascents this year. Not a single one sticks out to me in particular, but the mass of what Colin Haley has achieved this year is unbelievable. The motivation that he continues to show is very impressive and the sheer amount of hard ascents is incredible.

Mikey, you’ve been to Patagonia on a number of occasions, with numerous first ascents and repeats to your name. How strong is the lure?
Patagonia has always been a magnet for me and will probably continue to be so for a long time, though I'm not sure I will be spending quite as much time here in the future. My priorities in climbing and in life are slowly shifting.