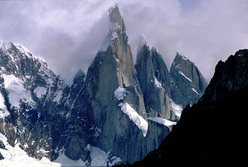 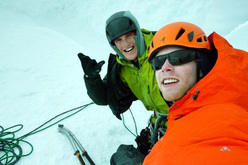 Hayden Kennedy and Jason Kruk on the summit of Torre Egger, December 2012.
Photo by Jason Kruk

Cerro Torre, Kennedy and Kruk and the Compressor route by fair means

On 17/01/2012 Hayden Kennedy and Jason Kruk climbed the SE Ridge (the Compressor route) of Cerro Torre (Patagonia) via a route "by fair means" with difficulties up to 5.11 A2. In descent the two removed a significant portion of the Compressor route established by Cesare Maestri in 1970.

The news, which had spread with partial information three days ago thanks to a post published by Colin Haley on Facebook, really is headline news. Not only due to the obvious importance of what has been achieved, but also because of what it implies in terms of "style and ""ethics". Yes, because last Tuesday American Hayden Kennedy and Canadian Jason Kruk climbed a line which, with some variations, avoids large sections of the original bolts on the Compressor route established by Maestri in 1970. Put in other words, it solves that project which had been attempted for years and which for many represented, and still represents, a solution and ethical answer to the hotly debated Maestri bolts on the Compressor route.

According to recent news published yesterday afternoon by Rolando Garibotti on SuperTopo, Kennedy and Kruk set off from Col della Pazienza and climbed to the summit in a mere 13 hours, encountering difficulties up to 5.11 with one section of A2 via a line which for quite some time had been attempted "by fair means" up the SE Face, I.e. avoiding the bolts placed by Maestri. One presumes, Garibotti writes, that they used some Maestri bolts for belays only and clipped 5 bolts in total: 4 on the variation established by Salvaterra and Mabboni in 1999 (as Salvaterra point out, just one was used for progression while all the others were used at belays) and 1 on the variation which Chris Geisler and Jason Kruk himself had attempted last year. This in itself would have been plenty to go on, but there is more: in descent the two chopped a large portion of the Via Maestri. This act will no doubt fuel the discussion once again in the entire mountaineering world, just like in 2007 when a majority of alpinists voted in favour of leaving the Compressor route in its original state.

At this point we feel it is only right to publish the entire news as posted by Rolando Garibotti, certainly the most trustworthy source of information at present. "Hayden Kennedy and Jason Kruk" Garibotti wrote "made a very fast ascent (13 hours from the Col of Patience to the top) of the SE ridge of Cerro Torre on what for sometime we have been calling "fair means" style, which implies not using Maestri's insane bolt ladders. We presume they used some of Maestri's belays but in pitches only clipped 5 bolts, four placed by Ermanno Salvaterra on his 1999 variation and one placed by Chris Geisler on his and Jason's variations last season. They followed an identical line to the one climbed by Chris and Jason last year, making a pendulum left in Chris's last pitch, to connect a number of discontinuous features over three short pitches to reach the top (5.11+ and A2). During the descent they chopped a good portion of the Compressor route, including the entire headwall and one of the pitches below. The Compressor route is no more."

For the record, a "by fair means" line up the SE Ridge had been searched for and attempted on numerous occasions in the past. The first to attempt a free line up the hotly debated Compressor Route was an Anglo-Argentine team in 1968 comprised of Martin Boysen, Mick Burke, Pete Crew, Jose Luis Fonrouge and Dougal Haston. In 1999 this was extended by Ermanno Salvaterra and Mauro Mabboni; the Italians established a variation to the left which avoided circa 200 original bolts. In 2007 this great variation was examined by Americans Zach Smith and Josh Wharton who added some more free pitches to the left of the Maestri route, while last February Chris Geisler and Jason Kruk were forced to abandon their attempt just 40m beneath the top of the headwall. Now the final act has been written... What is more, with the "bolt chopping" things have been taken a step further still. Perhaps this is another sign of how alpinism is experiencing a moment of transition and change - phases which evidently include these "forceful" solutions. In short, an alpinism of ethics and alpine style which stands head and shoulders above the rest. No doubt this will cause some heated discussions.

While waiting to understand and find out more... a final news item which in this context risks become truly marginal: last December, during their "warm-up" in Patagonia, Hayden Kennedy and Jason Kruk climbed both Punta Heron and Torre Egger, while on 01/01/2012 they established a new route, The Gentlemen's Club (900m, 400m new, 7a) on Aguja de L'S.