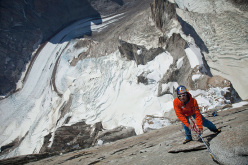 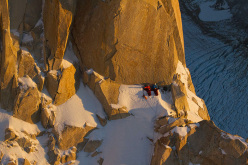 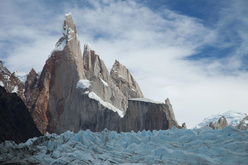 Interview with Austrian alpinist David Lama two years after the first free ascent of the Compressor route on Cerro Torre, Patagonia, carried out with Peter Ortner in January 2012.

Over two years have passed since the first free ascent of the Compressor Route on Cerro Torre at the hands of David Lama and Peter Ortner and the climbing world is only now beginning to comprehend what the two young Austrian alpinists really achieved on that 20 and 21 January in 2012. Greater understanding is no doubt being provided by the film that recently hit the mainstream cinemas that documents the entire ascent over the 3-year period. As everyone no doubt remembers, the film was financed by Red Bull and this sponsorship, coupled with bolts being placed on the mountain, fixed ropes left in-situ, gear stashed, helicopters on standby etc exposed Lama to an unprecedented barrage of criticism. That was back in 2010 and while in 2011 the mountain provided Lama and Ortner with practically no free climbing opportunities, a rare spell of unbelievably good weather in the winter of 2012 finally gave the climbers the chance they so desperately needed to set the record straight.

Lama and Ortner achieved their masterpiece just days after Jason Kruk and Hayden Kennedy chopped over a hundred bolts off the Maestri route and in many ways this hotly debated act overshadowed the Austrian's success, pushing this extraordinary feat out of the international limelight it deserved.

Things may now change thanks also, ironically, to A Snowballs's Chance in Hell which we believe has absolutely nothing to do with the Red Bull that many might imagine. Planetmountain was lucky enough to be invited to its premier in Innsbruck a while back and we used this opportunity to push all prejudices aside and find out more about the film and the ascent which, we are certain, is bound to gain in status over time.

David, let's start with the hardest bit of all, the technical crux of the route

Well the crux pitch is really my style of climbing, technical moves up vertical and at times only slightly overhanging terrain. First you follow the Salvaterra crack and then you break off left, around the arête to reach a smooth slab. The crack peters out and that's where the crux moves are.

What can you remember about those moments up there?
Everything. The gear I placed to protect this section, the tiny crimps through the crux. The rough Cerro Torre granite and the tiny quartz crystals that provide only a few milimetres of purchase. I remember the friction, how important it is to trust your feet way up there. As you edge up the arête a 1000m drop whistles away to your left and right.

How come you went left around that arête?
I suspected that the Salvaterra crack wouldn't go free, that's why I tried going left instead of following the bolt traverse right.

And then?
Well I tried to onsight the pitch but failed. I took three or four falls until I first managed to climb through this seemingly blank section. There are no features that you could use to aid your way up, so this section obligatorily needs to be freeclimbed. After rehearsing the moves Peter lowered me back down to the belay I sent the pitch second go.

How hard is it. At the time you reckoned it might be 8a.
Yes, I said 8a but as I mentioned before, the climbing up there is totally my style. It really wouldn't surprise me if it was much harder. Add to this the fact that it's not easy to protect. That's why I'd be really interested in hearing what others have to say, such as from the British teams who travelled to Patagonia a few months ago. Unfortunately though they had really bad conditions and didn't get a chance.

Conditions are key...
Of course you need good conditions. I'd been to Patagonia on five separate occasions and 2012 was the only season that provided us with a really decent chance to try and do the climb. We knew we had to time things properly and then seize our chance. But it’s quite mental being up there in good conditions knowing that it might take another five years to get a second chance.

Climbing the crux obviously opened the doors to the upper section
Yes, Peter followed, prussiked through the crux and I then led the next 4 pitches to reach the Iced Towers where we bivied and then reached the summit the next day.

Tell us about that day
We climbed the Iced Towers in about two hours. And then tackled the headwall. This required about another four hours, so we reached the summit at around midday.

Silly question: how beautiful is this route?
Although the climbing itself is less beautiful than it is demanding, the position is quite simply outstanding. The route from the bolt traverse all the way up to the Ice Towers is really cool and the headwall is just superbly exposed and quite serious.

What would you recommend to those who wish to repeat the route?
I think what sets me apart from many other climbers is my background. I'm not a classic alpinist in the strict sense of the word. I have a sport climbing background and I started off as a competition climber. In competitions you need to give 100% at a very specific moment and you never get the chance to try things over and over again. I think that's why I was eventually successful on Cerro Torre: if you want to freeclimb this mountain, you really need to be comfortable with climbing in this terrain and difficulty. And then, when you get the chance, you've got to be ready, you can’t afford to make mistakes.

David, the route gave you lots of ups but also lots of downs. You received a lot of criticism for this mammoth project, in particular after year 1 due to the bolts being placed on Cerro Torre for the film team.
Yes that's absolutely right. I suddenly came under fire from just about everywhere. For me all this was far more than just a barrage of criticism, I felt that something really important was on the line, namely my entire reputation as a climber. It was difficult taking that all in and at the same time understanding what had gone wrong. Let's just put it like this: all hell broke loose on the internet. A lot was published, much of it was wrong, everyone seemed to have their say.

And so?
I sat down and realised I had two options. Ignore the criticism altogether, or try and understand what it was all about. Many people interpreted my silence during those months as me ignoring the problem, but I can assure you this wasn't the case. I tried to understand, wanted to understand. The bottom line is that the ropes shouldn't have been fixed for the camera team and the bolts shouldn't have been placed. I realised that although I myself didn't actually drill the holes, the film team was only there because of me. So at the end of the day it was my responsibility.

We've been in close contact over all these years and it seems as if Cerro Torre has really shaped you.
Most definitely, the entire story has really influenced my style of climbing. I now know who I am and what I want to do and the way I now climb mountains is also thanks to this episode. It may sound strange, but I wouldn't want to have done without that barrage of criticism.

Those three years were full of sudden twists and turns. Are you happy with how the film turned out?
Yes, I'm really happy with the result. I'm not the producer, I wasn't the film maker, but I was often in the cutting room and I was allowed to provide my own ideas and input. The way we brought the project to an end made the entire undertaking even more complex for everyone but made the film a genuine documentary without any special effects whatsoever. And I reckon many will be surprised by the outcome.

Last question David: what did you think when you heard the bolts had been removed?
(laughs) Have a look at the film.

To find out more about where the film will be shown check out www.cerrotorre-movie.com