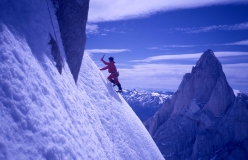 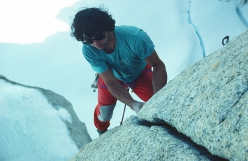 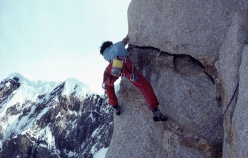 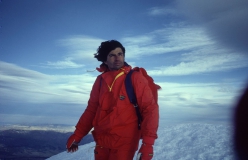 Marco Pedrini, Cumbre and the first solo ascent of Cerro Torre in 1985

The 1985 film Cerro Torre Cumbre by Fulvio Mariani that documents the first solo ascent of Cerro Torre in Patagonia, carried out by Swiss alpinist Marco Pedrini on 26/11/1985 via the Cesare Maestri Compressor Route.

This is one of the great sides of the internet and its algorithms: every now and then things resurface that were published years ago and subsequently forgotten about, like this trailer to Cerro Torre Cumbre. This award-winning 1985 film was directed by Fulvio Mariani and documents the historic first solo ascent of Cerro Torre in Patagonia, carried out on 26 November 1985 by the overly talented mountaineer Marco Pedrini from Canton Ticino, Switzerland. While yesterday the trailer bounced across the various social media, this morning Mariani decided to release the entire film in order to help everyone comprehend precisely what Pedrini had achieved more than 30 years ago.

Born in 1958 in Lugano, Switzerland, Pedrini was one of the leading climbers of his generation, with important repeats and first ascents across the Alps. He perished on 16 August 1986, probably while descending from a solo ascent of the American Direct on Petit Dru in the Mont Blanc massif.

His undisputed masterpiece was the audacious solo of the Cesare Maestri Compressor Route, an ascent carried out in a mere 13 hours on that sunny Tuesday more than three decades ago after he aborted an attempt the previous week circa 400 meters below the summit. At the time Pedrini was a mere 27 years old and, climbing fast and light (no stove, nor bivouac gear, rock shoes for the rock and plastic outers to wear over them for the ice, one 8mm rope and one 6mm rope for the rappels) he reached the summit at 20:30 after having set off from his snow cave at 7:30 in the morning.

In an era when precise weather forecasts were unheard of, on 25 November Pedrini sensed that a weather window was arriving and he therefore made his way to the foot of the mountain on his own. In his Amercian Alpine Journal entry he stated "It was very warm - indeed too warm. I climbed in T-shirt, trying to avoid the ice chunks that fell from the wall" After negotiating the headwall he explained "At 8:30 in the evening I was at the top. The sun set behind the Hielo Continental, the boundless, level glacier which is more than 400 kilometers long. Six hours of rappels during a marvelous night with full moon brought me back to the snow cave. A little later, at dawn, the weather turned foul."

A week later Pedrini returned to the mountain, this time with mountaineer and film maker Fulvio Mariani to reconstruct the climb and produce this priceless documentary. The duo ascended Cerro Torre twice more, on 3 and 12 December, capturing this spectacular footage with a 16mm Bolex Paillard spring-wound clockwork camera, an impressive feat in its own right. Even today the film is recognised as being one of the greatest mountain films of all time, and one of the most famous scenes is certainly Pedrini riding the compressor as if it were a motorbike, completely carefree and spontaneous. Unforgettable.

Published above is the 3-minute trailer and below the entire film in Italian.

20.02.2012
Cerro Torre an impossible mountain, the petition in favour of the bolt chopping
The petition, promoted by Rolando Garibotti, concerning the recent bolt chopping of the Compressor Route on Cerro Torre, Patagonia by the Americans Hayden Kennedy and Jason Kruk.