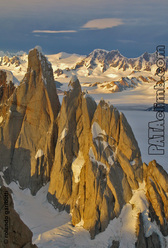 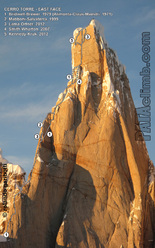 The East Face of Cerro Torre and the routes up the headwall.
Photo by Rolando Garibotti 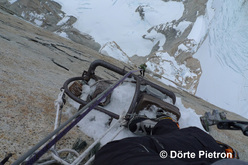 The compressor on Cerro Torre
Photo by Dörte Pietron 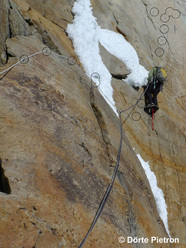 PORTFOLIO / gallery Portfolio: Cerro Torre an impossible mountain, the petition in favour of the bolt chopping

Cerro Torre an impossible mountain, the petition in favour of the bolt chopping

The petition, promoted by Rolando Garibotti, concerning the recent bolt chopping of the Compressor Route on Cerro Torre, Patagonia by the Americans Hayden Kennedy and Jason Kruk.

Signed by numerous alpinists, this petition which supports the action of Kennedy e Kruk shows how the bolt chopping - just like the original bolting by Cesare Maestri - has split and mobilitated the world of alpinism. So, just like with Stefano Lovison's text "Taliban on Cerro Torre", signed by numerous alpinists and mountain guides, we have now published this new petition to give voice to all views. Just like we published the thoughts of Mario Conti, Mario Manica and Manuel Lugli.
Before reading the text, there are things worth noting: firstly, in our Italian translation the word bolt has been translated into "chiodo a pressione", "pressure bolt" like those used by Maestri in 1970, which are obviously different from the bolts we know nowadays. Secondly, in the brief history which introduces the petition, David Lama's name is absent and it was the Austrian who, a few days after Kennedy and Kruk, carried out the first free ascent of the Compressor Route. As many know, in an interview with Rock & Ice Lama disagreed with the bolt chopping: "I don't think the bolts should get replaced, but I also think they should have not been chopped." And so the debate continues...

In 1952, after making the first ascent of Cerro Fitz Roy, Frenchman Lionel Terray described the nearby Cerro Torre as “an impossible mountain,” a phrase that described well the ice-capped, mile-high granite needle. In early 1968 an Anglo-Argentine team composed of Martin Boysen, Mick Burke, Pete Crew, Jose Luis Fonrouge and Dougal Haston attempted the southeast ridge of Cerro Torre, managing to climb 450 meters above the Col of Patience without placing any bolts. In December of 1970 Italians Ezio Alimonta, Carlo Claus and Cesare Maestri climbed to within 60 meters of the summit, turning around while still on vertical ground, having placed upwards of 300 bolts with the help of a gas-powered air compressor. Courtesy of the use of the compressor, the “impossible mountain” was no more. In January of 1979 Americans Jim Bridwell and Steve Brewer completed Alimonta, Claus and Maestri’s near miss, finishing the so-called Compressor Route. In January of 2012 American Hayden Kennedy and Canadian Jason Kruk climbed the southeast ridge without using any of Maestri’s bolts for protection and during the descent chopped 120 of his bolts.

Quotes
Jorge Ackermann, “Now who had the right to take bolts out? The ones who climbed the route without using the bolts had the right to take them out and Jason and Hayden chose to do this and I respect their decision. They climbed the headwall beautifully and I applauded them for it, this is a huge accomplishment in the world of climbing. A bit more discretion would have helped to keep the scandal under wraps but now it is done. In the end though, it is Cerro Torre that we are talking about and it seems that it is a mountain that does not incite discretion.”

Pete Crew, “It is time that the Maestri nonsense was knocked in the head once and for all.”

Ben Campbell-Kelly, “What could be better than having an iconic mountain with only challenging routes to the top? No gimmicks and no via ferratas! It's exciting to see how the new generation is making its mark.”

Leo Dickinson, “The compressor route on Cerro Torre should never have been in existence – nature did such a beautiful job at making Cerro Torre a world class mountain. The bolt route has been a scar on the history of mountaineering for too long..”

Reinhold Messner, “Maestri was free to put the bolts in 1970, Jason and Hayden were free to take the bolts out. Cesare demonstrated that CT was possible with the compressor, Jason and Hayden demonstrated that it was possible without. They have all my respect – for having liberated the Compressor route from the grips of conquest alpinism, a style that we should finally get over with.”

Pedro Skvarca wrote, “Personally I believe that the bolts should have never been placed. I was never in agreement with Maestri’s action, he made a grave mistake and breached the ethics of mountaineering.”

Mark Twight , “Having grown up in the culture of climbing that I knew, and been mentored by the men who inspired and educated me, I never thought I would see the day that anyone would be ‘against’ chopping those bolts.”