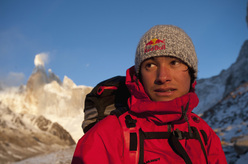 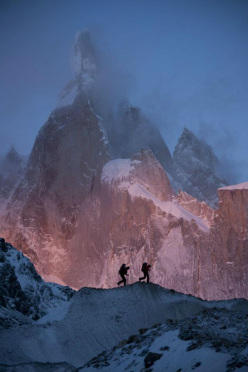 The report by David Lama about his first free ascent of the Compressor route up the SE Ridge of Cerro Torre (Patagonia), carried out by the Austrian climber from 20 - 21 January 2012.

David Lama has kept his promise. On Facebook he has now published a preliminary report which sums up his first free ascent up the SE Face of Cerro Torre which he carried out on 20 - 21 January in a 24 hour push from the Col of Hope, with one bivy. We've published the report below in its entirety and are awaiting more details soon. In particular, we hope to find out more about the precise line they climbed up the Headwall: Lama writes that 20 metres below the compressor he traversed right to follow a series of cracks and corners which led him and his partner Peter Ortner to the summit. This solution would indicate (note the conditional) something completely new, and there can be no doubt that Lama is capable of this and much, much more. Another interesting point is how he resolved the bolt traverse: Lama ascended to the left of the crack climbed by Salvaterra and Mabboni. It is at precisely this point that Lama fell, freeing the pitch second go and starting from the belay. And it's interesting that while talking to his team via telephone the Austrian explained that although the traverse is the technical crux, the real difficulties lie higher, climbing unstable, friable rock which forced him to make long run-outs where falling simply isn't an option.
While waiting for further details ( it seems as if the Austrian and all the other alpinists, including Kruk and Kennedy, are in the mountains making the most of the magnificent Patagonian weather) here is what David Lama posted on his FaceBook page.


"I can't believe it… For more than three years I was driven by the idea of freeclimbing the Compressor route on Cerro Torre and now this dream has become true!

My partner Peter Ortner and I started on January 19th from El Chalten and hiked in to Nipo Nino, our first camp. The next morning we climbed up to the Col de la Paciencia (Col of Hope, Editor's note), rested there for a few hours and then started our attempt at around 1pm.
We climbed to the start of the Bolt Traverse, but instead of turning right, we went straight up on the technically difficult arete, a few meters left of the Salvaterra crack. I took a couple of falls, until I figured out the right sequence and then was able to send the pitch on my second try from the belay. A few pitches higher we reached the Iced Towers, where we picked a small ledge into an icefield to bivi.
Early the next morning we climbed to the start of the headwall. The fact that Hayden and Jason had chopped Maestri’s bolts a couple of days ago made my endeavour even more challenging, especially mentally as the protection was poor and I had to do long run outs. Climbing on hollow and loose flakes we followed the original Compressor route for three pitches. About 20 meters below the compressor we traversed to the right and then reached a system of cracks and corners that lead us to the summit. Climbing the route in alpine style took us 24 hours from the Col.

To me this first free ascent of the south east ridge of Cerro Torre is the end to the probably greatest adventure I experienced in my life so far. I’m especially proud having it done without adding any bolts. I learned a lot during the past years and climbing in this amazing mountain range has simply been great. Realizing dreams – it couldn’t be any better!"
posted on 23/01/2012 by David Lama on his Facebook page