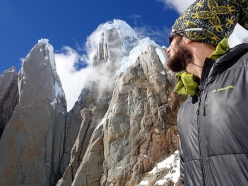 The video the documents the first ascent in the 2016/2017 season on the Ragni route on Cerro Torre in Patagonia, carried out by New Zealand’s Daniel Joll and Kim Ladiges.

The current alpine climbing season in Patagonia is one of the worst in recent years and those long spells of good weather that marked the previous seasons have quickly become a faded memory. While around Christmas 2013 a record number of 48 alpinists reached the summit of Cerro Torre via the Ragni route, in the 2016/2017 summer season the mountain had to wait until mid-February to witness its first summit, carried out by New Zealand’s Daniel Joll and Kim Ladiges.

Following in the footsteps of Daniele Chiappa, Mario Conti, Casimiro Ferrari and Pino Negri who breached the summit mushroom on 13 January 1974, Joll and Ladiges required three attempts to reach the peak’s highest point. The two were completely alone on the mountain as the weather forecast had persuaded all other climbers to remain put in El Chalten. It’s worth noting that to save time before the arrival of an oncoming storm, on the final pitch Ladiges, rather than digging a tunnel through the rime ice, climbed climbed the final mushroom on the outside.