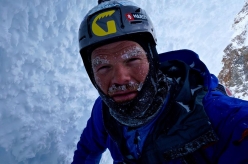 The video documenting the summer 2015 attempt of Austrian alpinist Markus Pucher to make the first solo winter ascent of Cerro Torre in Patagonia.

Markus Pucher is someone who has always dreamed big. His latest vision, recurrent and almost verging on being obsessive, is one of the biggest you could ever conjure in Patagonia: to make the first solo winter ascent of Cerro Torre.

On 27 December 2014 the Austrian mountaineer stunned everyone with his ascent of the Ragni route through a raging storm, and these anything but summer conditions convinced him that his unattainable ambition could perhaps can transform into something tangible.

Pucher returned during the 2015 Patagonian summer but conditions were prohibitive, forcing him to turn back 300m below the summit. This is the story of his attempt that ... will not be his last.

>> WATCH THE VIDEO ON: www.redbull.tv