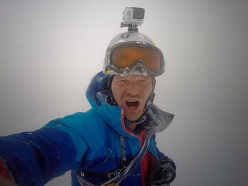 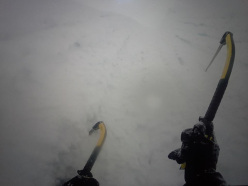 A year after his fast solo ascent of the Ragni route on Cerro Torre, the Austrian alpinist Markus Pucher has now soloed the classic west face route again, this time through a raging storm.

We’ll start 2015 with a bang, namely with Markus Pucher's audacious solo ascent of the Ragni route on Cerro Torre in Patagonia that has been described by the website Pataclimb run by Rolando Garibotti as "one the the most harrowing ascents in Patagonian climbing history." The reason for this description lies in the fact that the Austrian alpinist climbed Cerro Torre on 27 December 2014, during a raging storm that forced all other alpinists in the massif to remain low and desist from their climbs.

While the entire report of the ascent is published on the site and is well worth reading, the details are as follows: start at 6:00am from Filo Rosso, ascent to the Elmo, the headwall, the fight for survival on the last pitch through the ferocious storm to reach the summit at 7 pm. Then the descent with a mere 3 ice screws and a 60m, 7mm rope, a terrible fall that Pucher managed to stop just 2 meters from the 1300m drop down the South Face… After 25 hours on the trot Pucher miraculously returned to his bivy at Filo Rosso, ate and drank, then began the 12-hour march back to El Chalten.

In January 2013 Pucher had stunned the mountaineering world with his amazing solo ascent of the Ragni route in just 3 hours and 15 minutes from his bivy below Colle della Speranza. An in-depth report about the recent solo will follow in due course, what we have so far are the first words Pucher sent us today: "The ascent wasn’t planned. I simply wanted to see how far one could climb up Cerro Torre in bad weather. I managed to reach the summit. No one thought it was possible, except for me."