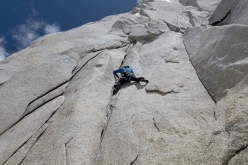 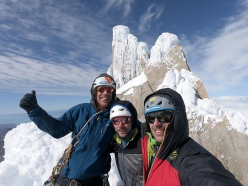 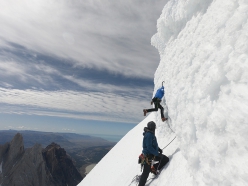 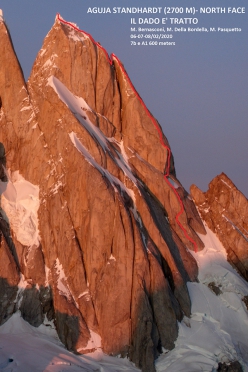 After the long wait in Patagonia for good weather, the much-awaited “ventana” has resulted in numerous ascents in the mountains around El Chalten including Fabian Buhl’s paraglide off Cerro Torre and a new route up the north face of Aguja Standhardt at the hands of Italians Matteo Bernasconi, Matteo Della Bordella and Matteo Pasquetto. The new Ragni di Lecco route is called Il dado è tratto, The die is cast, starts circa a hundred meters to the left of Festerville (Nathan Martin, Tim O'Neill, 2000) and joins this at the top of the first pillar, breaching difficulties up to 7b and A1 in its 600m length. It is possible that the first 2 pitches had been attempted in the past by previous parties.

On Wednesday 5 February a fine weather period began, the the first real "window" this season which up to now has been even worse than the poor Patagonian standards.

That day Matteo Bernasconi, Matteo Pasquetto and I ascended to our advanced camp to check the conditions. Despite having a clear idea about wishing to attempt the British Diedre route on the East Face of Cerro Torre, we discussed at length what we should do. Some sections of our route, in particular the last 400 meters, were totally covered by a thick layer of snow and rime, so much so that from below we couldn’t even see the rock that we should have climbed. Conditions like these obviously gave us little or no chance of success and, furthermore, added significantly to the danger of being hit by ice which, inevitably, would detach from high above in good weather. We all agreed that the risks at stake were too high, and the chances of success too low, and so we opted for plan B.

During one of my visits to the valley a few years ago I noted a line up Aguja Standhardt, which seemed unclimbed. I imaged a route up the mountain’s obvious north ridge, parallel to and about a hundred meters away from Festerville that I’d repeated in 2013 with Bernasconi and Luca Schiera.

When I suggested trying this route to my climbing partners, they immediately agreed and we pounced o the opportunity to give it a go. As things turned out, the quality of the route is even more outstanding than I’d had thought!

The route follows an extremely logical system of cracks and the pitches flow spectacularly from one to the next… a stand out feature is the overhanging corner in the center of the route marked by a 100m crack and dozens of meters of perfect hand jams! It’s a pitch dreams are made of!

The upper section of the route proved somewhat easier but by no means less beautiful, and after a cold but spectacular bivouac below the first "pillar" we reached the true summit on the morning of 8 February.

Right at the top we encountered our Belgian friends Nicolas Favresse and Sean Villanueva, they too had established a difficult new route somewhere else on the same mountain… it was a beautiful moment.

So after Cerro Torre and Torre Egger, now their smaller sister Aguja Standhardt has route established by the Ragni di Lecco!

While we were out in the mountains, much of the ice that was plastered to Cerro Torre has fallen off or melted and conditions now might be good for our main project... we’ll keep our fingers crossed and hope to get another weather window!