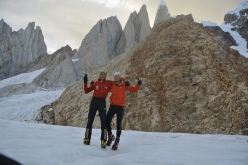 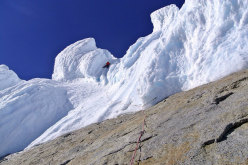 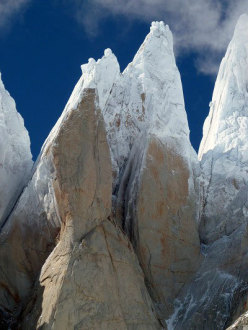 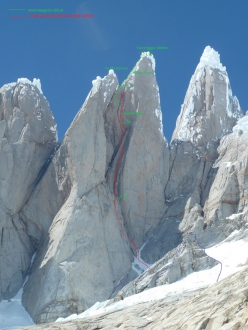 On Saturday 2 March 2013, Matteo della Bordella and Luca Schiera made the first ascent of a new route which, for the first time ever, breaches the West Face of Torre Egger (Cerro Torre massif, Patagonia).

"Summit yesterday, descent completed, we're now back in our tent. It was devastating, 4 extremely tough days, we're exhausted but we made it. Big thanks to all Ragni." The summit is Torre Egger in Patagonia. The SMS was sent by Matteo della Bordella and Luca Schiera. And the adventure they've just experienced was the difficult and dangerous first ascent of the West Face of Cerro Torre. A long journey, a "battle" almost which as many will remember started back in 2011 with della Bordella and Matteo Bernasconi, continued last season and now - with Saturday's summit and yesterday's return to the base of the mountain - is completed with this final rush which della Bordella and Schiera unsurprisingly described as "devastating".

The latest episode, this year's attempt, began with their arrival in January. The team was comprised of della Bordella and Bernasconi and also by Luca Schiera, the 22-year-old alpinist from Alzate Brianza, in Patagonia for the first time ever. After a "training run" up Aguja Standhardt's Festerville the three started the waiting game to seize the moment, i.e. the right weather window. This proved long and "uncomfortable" seeing that the approach to the mountain's base is arduous, complicated and even dangerous. The attempts were continuously dashed by bad weather and the expedition then ran out of time. Matteo Bernasconi had to return home (he needed to take part in an Instructor's course for Mountain Guides), while Della Bordella and Schiera decided to hang on; they postponed their return and... continued to give it a go. It seemed a gamble and many (first and foremost the Ragni di Lecco) kept their fingers crossed. At the time no one could have known for sure, but their decision was going to be right.

After 7 days on the glacier sitting out poor weather in their tent, last Friday the time finally came. Matteo and Luca set off in the night between Thursday and Friday. On Friday afternoon they reached Colle Giongo – De Donà (also known as Col del Lux) following a route that was partially different from last year's line. In other words, 4 or 5 pitches which avoided the large overhang that had previously been considered dangerously laden with snow. They bivied. Then started climbing again and reached the summit of Torre Egger. Now they had to descend, a task which, seeing the face they had to tackle, was by no means easy. On Saturday they bivied above the most dangerous section, the one subject to rock fall and which (presumably) they negotiated in the early hours of the morning. They then reached their tent on the glacier. It was 19:30 (Italian time) and they were exhausted. It marked the end of three years of adventures and efforts. The final act of a 1100m high route that, in one way or other, is also the first complete line to ascend the West Face of Torre Egger. A summit that Matteo Della Bordella and Luca Schiera wish to share with Matteo Bernasconi. Now we'll wait for all the details to emerge. What is certain is that the history of the West Face of Torre Egger comes from afar, that it is directly linked to Italian alpinism in general and the Ragni di Lecco in particular.

The West Face was first attempted in 1985 by an expedition led by Gino Buscaini. Then, in 1989, the story continued thanks to the Ragni di Lecco alpinists Paolo Crippa and Maurizio Maggi (members of the 1989 expedition) and Eliana De Zordo. After Maggi's return to Italy Crippa and De Zordo proceeded alone, but the two never returned. This tragedy left a deep mark and even today it moves not only the Lecco mountaineering world. The West Face story continued in 1992 with Maurizio Giarolli, Andrea Sarchi and Odoardo Ravizza who managed to climb all the way to the Punta Herron notch. 1996 was marked by a courageous attempt up the centre of the face by Lorenzo Nadali, Pietro Dal Prá and Andrea Sarchi who were foiled by the terrible rock and the large roof which characterises the lower section of the face. In 1997 Ermanno Salvaterra and Adriano Cavallaro attempted a line: they headed towards Col del Lux but were stopped short after 300m due to constant, dangerous rock fall. And now there is this route which follows, in part, the Salvaterra – Cavallaro attempt - and which certainly testifies an out of the ordinary dogged determination and courage.