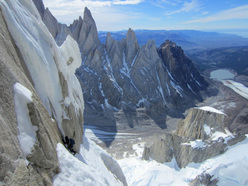 At the start of December Colin Haley and Jorge Ackerman completed a new route up Aguja Standhardt in Patagonia: El Caracol (500m, 5.9, A1+, M4). On 7 December Haley soloed Aguja Innominata via the Anglo-American route 400m 6c (6b+ A0).

A route attempted in 1977 by a British alpinists Brian Hall and John Whittle on the South face of Standhardt and which stopped just beneath the typical summit mushroom and a mere 20m shy of the summit, was completed at the start of December by Colin Haley and Jorge Ackerman.

On 3 December the American and Argentine climbers followed the line taken by the British duo and by a series of other unsuccessful parties since, with Ackerman leading the first mixed pitches above the Standhardt Col which brought them to the obvious snow ramp which leads from the east to the south face. After having simul-climbed across this Ackerman led another two mixed pitches to reach "the defining feature of the south face", namely the main dihedral system. Haley took over from here but after some aid climbing he was forced to make two pendulums to reach the left-hand crack system. They then continued towards the summit which they reached at 9.00pm, exiting direct instead of left as Hall and Whittle had attempted 34 years earlier. They retuned safely to the Norwegos camp, twenty-five hours after departing. The route name "El Caracol" - the snail - reflects both the spiral shape of the route line and also their snail-like pace on the harder pitches.

Four days after this ascent, Haley soloed Aguja Innominata, in the Fitz Roy massif. He ascended the 2482m high peak, also referred to as Aguja Rafael, via the Anglo-American route established by Rick Silvester, Dan Reid, Paul Braithwaite, Martin Boysen and Leo Dickinson in 1974 and rope-climbed half the 400m 6c (6b+ A0) line while he free soloed the other half.

Ful details of the ascents can be found of colinhaley.blogspot.com. For information about the climbs check out pataclimb.com