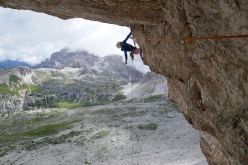 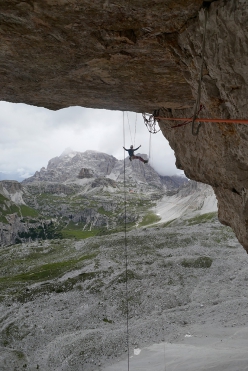 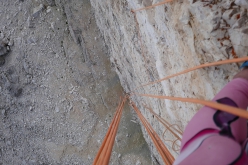 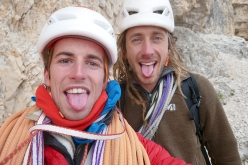 Climbing with David Leduc, on Friday 17 July Belgian climber Sébastien Berthe made a singe-day repeat of Bellavista, the difficult multi-pitch on Cima Ovest di Lavaredo in the Dolomites.

Belgium’s Sébastien Berthe has made a remarkable, one-day ascent of Bellavista, the huge multi-pitch Alexander Huber established on his own and in winter in 1999 on Cima Ovest di Lavaredo in the Dolomites prior to freeing it in 2001 with difficulties estimated in the region of 8b+/8c.

Berthe pulled off what is likely to be the fastest repeat so far by teaming up with David Leduc and starting at 6 am. The duo sped up the 450m outing, with Berthe needing just two goes to send the crux pitch which he described as "one of the craziest one I've ever climbed: 55m of traversing overhang and sustained climbing on good holds. Terribly exposed, if you fall, you find yourself at the end of the rope, in the middle of the void, far away from the wall."

He fell on the the second move of the following 7c+, returned to the belay and then onsighted all the rest of the route, while after doing the Cassin route on the upper section he swung leads with Leduc to top out at 9 pm.

Berthè believes the difficulties are slightly easier originally stated, he concedes tick marks and fixed quickdraws made things considerably easier. "It is so impressive to notice that Alexander Huber opened it over a four-day period of solitary climbing in winter 1999! Then, he freeclimbed it in 2001, and he didn't have tick marks and fixed draws in the crux pitch... Bravo!"

Berthè is no newcomer to hard multi-pitches and in November 2019 he became one of the very few to complete a free ascent of the The Nose on El Capitan in Yosemite, USA. Earlier this summer he repeated Carnet d'adresse (250m, 8b/+) on Rocher du midi and Voie Petit (8b, 450m) on Grand Capucin in the Mont Blanc massif, as well as the 8c+ sport climb Mister Hyde at Ceuse. Bellavista is Berthe’s first route in the Tre Cime di Lavaredo group and only second route in the Dolomites after the Fish route on Marmolada a few years ago, but certainly not the last...

27.08.2013
Dani Moreno, a successful summer in the Dolomites
Spanish climber Dani Moreno provides his climbing trip report to the Italian Dolomites which includes highlights such as Bellavista on Tre Cime di Lavaredo.

13.09.2011
Bellavista in the Dolomites for Luka Krajnc
Slovenian climber Luka Krajnc has carried out the fourth complete free ascent of Bellavista on Cima Ovest di Lavaredo, Dolomites, first ascended by Alexander Huber solo during winter 1999 with difficulties up to A4 and then freed by German at 8c in July 2001. Urban Golob provides the report.

19.09.2002
Bellavista and Bubu Bole
On Monday 16 September Mauro Bole managed to repeat Alexander Huber's Bellavista on the Cima Ovest, Lavaredo in two steps, first the upper section, then the lower.