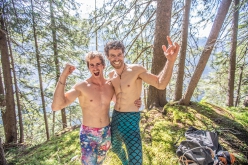 Sébastien Berthe and Siebe Vanhee celebrating on the summit of Staldenfluh in Switzerland's Lauterbrunnental after making the 3rd and 4th ascent of 'Fly'.
Photo by Julia Cassou, 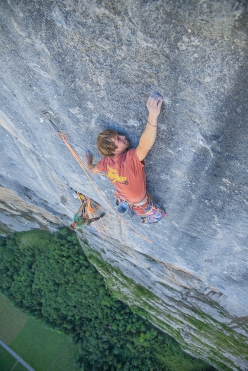 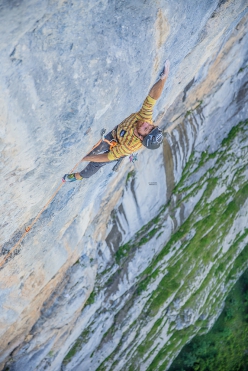 Siebe Vanhee reaching through the first hard moves of the 35m crux pitch of 'Fly' on Staldenfluh, Lauterbrunnental, Switzerland
Photo by Julia Cassou, 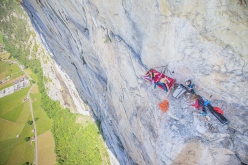 Siebe Vanhee and Seb Berthe doing their yoga exercises in style at their portaledge camp, 400m off the ground below pitch 17 on Fly on the Staldenfluh, Lauterbrunnental, Switzerland
Photo by Julia Cassou,

Belgian rock climbers Sébastien Berthe and Siebe Vanhee have made a ground-up free ascent of the 20-pitch (550m) test-piece ‘Fly on the Staldenfluh in the Lauterbrunnen Valley in Switzerland.

Belgian big wall specialists Sébastien Berthe and Siebe Vanhee joined forces last week to make the first ground-up free ascent of the 550m testpiece Fly in Switzerland’s pristine Lauterbrunnental. Established by Roger Schäli with various partners between 2004 and 2008 and freed over a period of 4 days in June 2014 by Alexander Megos, the route was repeated in 2019 by Cédric Lachat who, after having worked the line with Tobias Suter, pulled off the first one-day ascent.

Joined by photographer Julia Cassou, Berthe and Vanhee set off at 7:00am on 12 June with their portaledge and fully packed haulbag in order to make their one-push ascent. "For us, the ground-up ascent with the aim to send it all at once without returning to the ground is the purest way to climb an alpine multipitch" explained Vanhee.

The two made fast progress and managed to reach the obvious ledge below pitch 17 at 2:30pm, having onsighted all pitches except for two 7c’s which were swiftly redpointed. The next morning Berthe set the bar high with his onsight of the next pitch, a tricky 8b which Vanhee then flashed, and the duo the climbed the next 7b+ to reach the crux pitch graded 8c. After working the moves Vanhee managed to redpoint the exposed pitch on his third go and just before the sun hit the west face, while Berthe opted to save his skin and try the next morning.

Early on day 3 Berthe then cruised his way up the minute holds to send the crux length, unlocking the way to the final pitch originally graded 8b+; after working the moves this too was redpointed by both of them on their third go. Both climbers feel the penultimate pitch to be more in the region of 8b+ than 8c and the last pitch 8b instead of 8b+ but, grades aside, they concur that the route is an absolute gem.