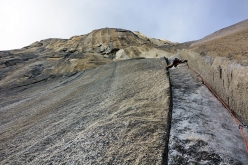 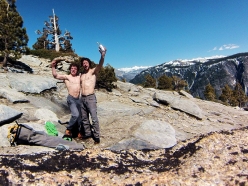 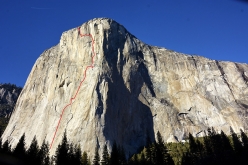 Muir Wall is a hard and sustained route up El Capitan's southwest face. Its smooth, featureless rock demands not only pure finger power but also proper technique and a strong head. Muir Wall was first free climbed in 2001 by Tommy Caldwell and Nick Sagar. Despite the aestehtic and obvious line, only few parties have free climbed this route.

Arriving in Yosemite on 11 April, the two Swiss encountered winter conditions. Snow and melting water were making free climbing impossible. However, the climbers remained optimistic and they started to aid up the lower part of the route, stashing water and checking the hard pitches.

A 10 day period of good weather at the end of April changed everything; the two climbers waited for the wall to dry and then started the final push. For Schüpbach and Vogt it was clear they would stay on the wall until both had free climbed all pitches. While Dimitri made short work of the hard boulder sections, it was Silvan’s experience at crack climbing that helped to succeed. A day of rained forced them to hang out in the portaledge. The most memorable pitch was the 60m chimney (the Shaft), which was only doable with “strong will and a lot of scratches.”