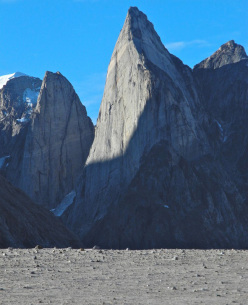 Matteo Della Bordella, Silvan Schüpbach and Christian Ledergerber have made the first ascent of The Great Shark Hunt, a new route up the Shark's Tooth in Greenland.

There's little to go by at the moment, but certainly enough to confirm that in Greenland Italy's Matteo Della Bordella (Ragni di Lecco member) and the Swissmen Silvan Schüpbach and Christian Ledergerber have established a fine new route in great style. Called The Great Shark, the circa 900m high new route was put up over a period of three days up the NE Face of Shark’s Tooth and the summit was reached on 18 August. This is only the second route on the mountain, after the Dance on Tiptoes climbed in May 2011 by the Russian alpinists Alexander Ruchkin and Mikhail Mikhaylov. It's worth noting that the new route was climbed onsight, alpine style and without fixed ropes, with only two bolts placed in total (one to fix a portaledge during the ascent and one for an abseil during the descent). Furthermore, it's worth highlighting that the three reached the base of the mountain after having spent more than 5 days covering 220km by kayak, followed by a further 50km travelled on foot to transport their gear to base camp. This is what della Bordella managed to relay via satellite phone before bad weather interrupted the call.


" On August 18th we arrived on the summit of shark's tooth! We opened a new route in the very center of the north east face. The climb took three days, we climbed all the route onsight with continuous and sustained difficulties. The route follows the obvious crack system in the center of the wall, with some traverses to connect the different cracks. The overall length of the route is more than 900 meters, and the rock was not always of the best quality: the crux pitches offered some runouts on loose flakes and poor protection. However we were able to complete our climb without using bolts for free climbing, we placed only one to hang the portaledge and one for a short rappel which the leader free climbed. The fourth day we descended the mountain rappelling the Russian route on the arete, thus our line is basically as clean as we found it. It was a great team success! We named our route THE GREAT SHARK HUNT to recall the long journey which led us to this summit. Climbing, mountaineering, adventure and life can't be better than this for us. We want to thank everybody who believed and supported our project"